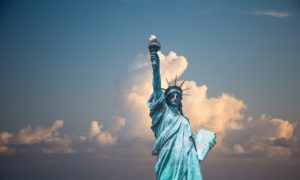 With Joe Biden having all but claimed the Democratic nomination, and the US election cycle moving from primaries to general, many are wondering what may be thrown Wall Street’s way in November.

With Biden and Trump, Wall Street has two business-friendly candidates, however, their proposed policies are quite different.

“As Mike Tyson said, ‘everyone has a plan until they get punched in the face’. In this case, the punch is the challenge of getting policy through congress and finding a way to fund infrastructure projects. Biden probably has as good a chance of executing this promise as anyone,” Garrett says of infrastructure promises.

“What a candidate claims as policy priorities while campaigning can be very different to what is feasibly implemented if the candidate is elected.

“Most major policies require congressional approval,” Garrett continues. “So trying to make heads or tails of what Trump or Biden might actually be able to implement is a guessing game at this point.”

This article also features commentary from Betashares and Bell Partners.