Investors have been on a rocky ride since late February, with share markets worldwide experiencing significant volatility as the magnitude of COVID-19’s impact has become clearer.

At times like this, it can be tempting to consider abandoning your investment strategy, selling down to limit your potential losses and then aiming to buy back in once things “have settled down”.

We know from history, however, that this approach is seldom optimal and that investors who hold their nerve during difficult periods are usually rewarded over the longer term. Indeed, much of the data in this article was first referenced during a period of volatility in late 2018 and, interestingly, the current situation has not changed much of the long-term historical context.

While we’ve previously outlined some tips for surviving market falls, it’s always useful to analyse market history. Past performance obviously can’t guarantee how things will pan out but it can help put a downturn in context. As Mark Twain is purported to have said: History doesn’t repeat, but it certainly rhymes from time to time.

The chart below tracks the performance of the benchmark Australian share market over the past four decades.

The S&P/ASX200 is the main performance benchmark for the Australian share market but its history only extends back to 1992. To expand our analysis, we have overlaid data from the All Ordinaries Index, our local market’s primary index prior to that point.  The combined chart extends back to 1980, which importantly includes the lead-up to and aftermath of the 1987 stock market crash. 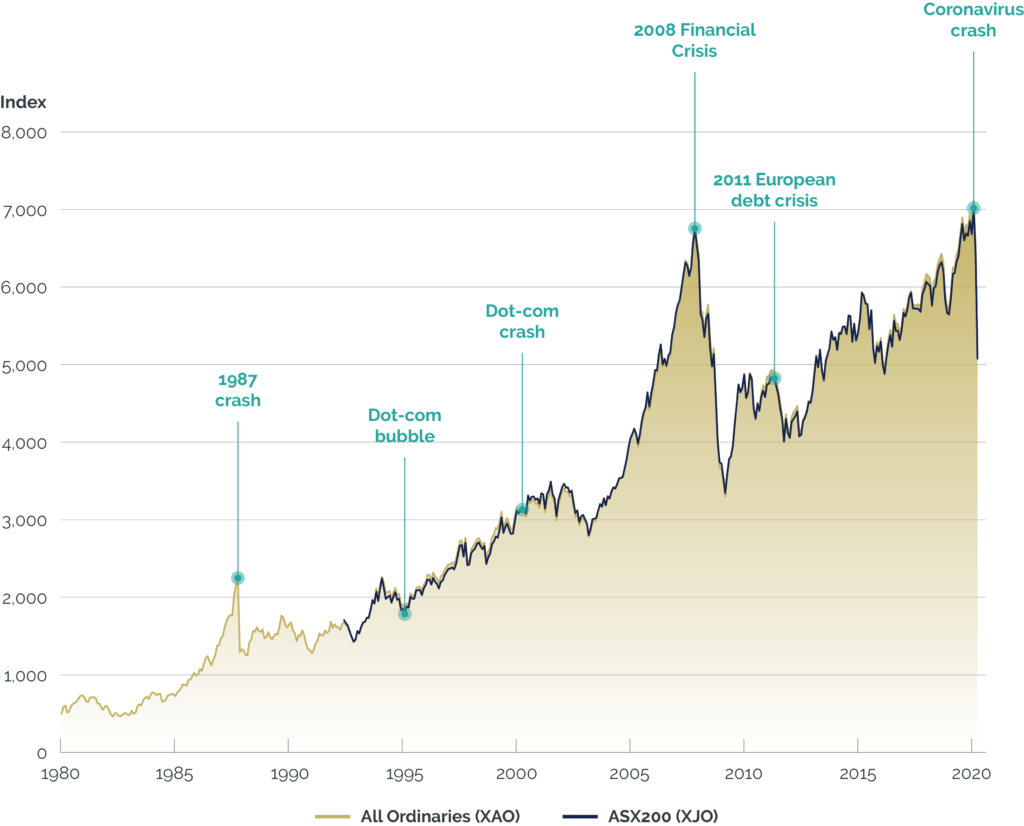 Over the past 40 years, the Australian share market has generally trended upwards, growing by an average 5.9% per annum. Of course, the trend has hardly been smooth and consistent, with periods of significant declines (before the current downturn) seen particularly in 1987, the GFC in 2007-08, the Internet technology bubble of the late 1990s and the European debt crisis of 2011.

It is worth noting that while recent market decline, while clearly significant, have only really retraced the index back to its 2016 levels at this stage, not including dividends (though further falls are possible). 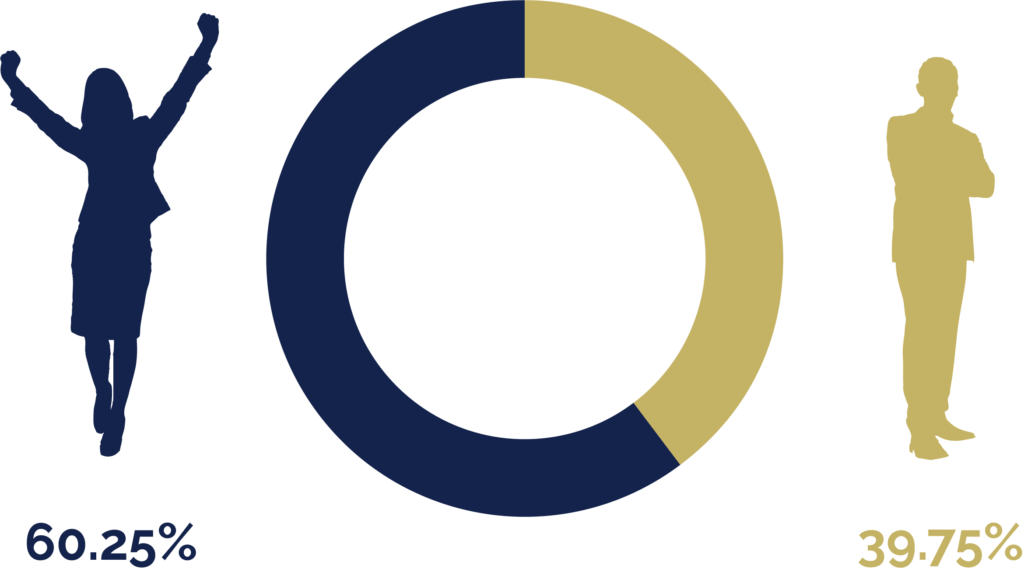 When the Australian market has declined, those falls have tended to be relatively short-lived. In most cases (92% of all down-months), the declines have lasted 1-3 months before the market has rallied.  There have only been two instances over the last 40 years (during the GFC and 2011) when the market has declined for six consecutive months.

VOLATILITY – IN BOTH DIRECTIONS – IS PART OF INVESTING

One of the main takeaways from this data is that market volatility – just like we are experiencing now – is unfortunately a normal and unavoidable part of investing. Markets invariably have periods of weakness, but also tend to recover relatively quickly (albeit in an unpredictable manner). Over the longer term, history shows that markets generally trend upwards and provide long-term returns to those investors who are disciplined and patient enough to ride out the inevitable market fluctuations.

The chart below tracks the Australian Stock Exchange on a yearly basis from 1936 to the end of March 2020.

Data from before 1979 is a rough guide due to the variety of data sources. Australia’s first share price index was only created in 1936 so that’s as far back as it’s possible to go.

The main takeaway from this chart is the general upward trend in equities over time – even across multiple periods of significant (and at the time, seemingly unprecedented) economic upheavals and crises. 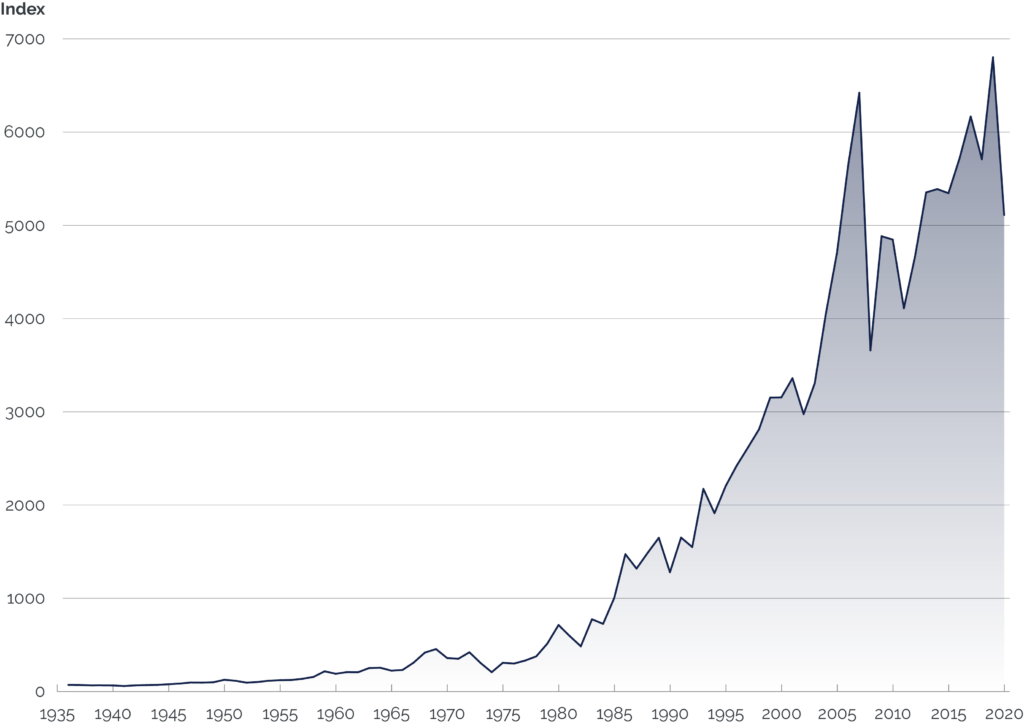 Volatility goes in both directions, too. All Ordinaries data shows that three of the top 10 largest percentage gains since 1984 occurred in March. Trading days in 1987 and 2008 dominate the other largest gains. 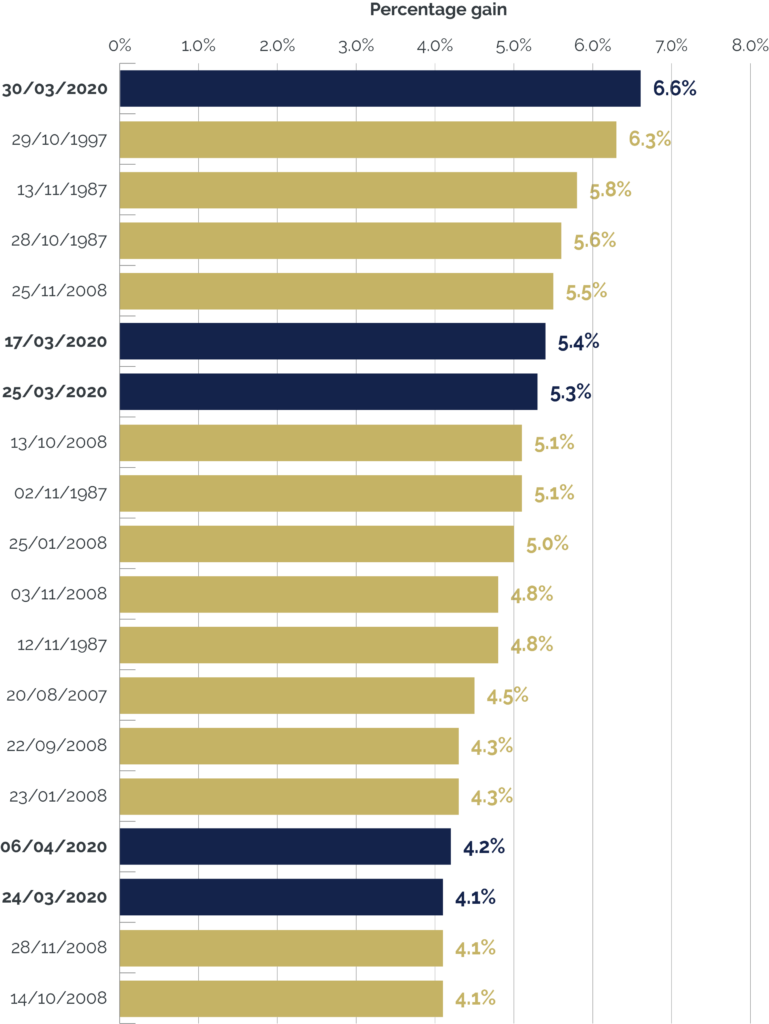 IT’S NOT JUST PRICE THAT MATTERS

It is worth remembering that price changes are only one part of the return picture for investors. Dividends are, of course, another major source of share market gains and can often provide a useful buffer against price declines. The chart below shows the ASX200 data back to 1992 but also overlays the impact of dividends (which are assumed to be reinvested back into the market rather than kept in cash). 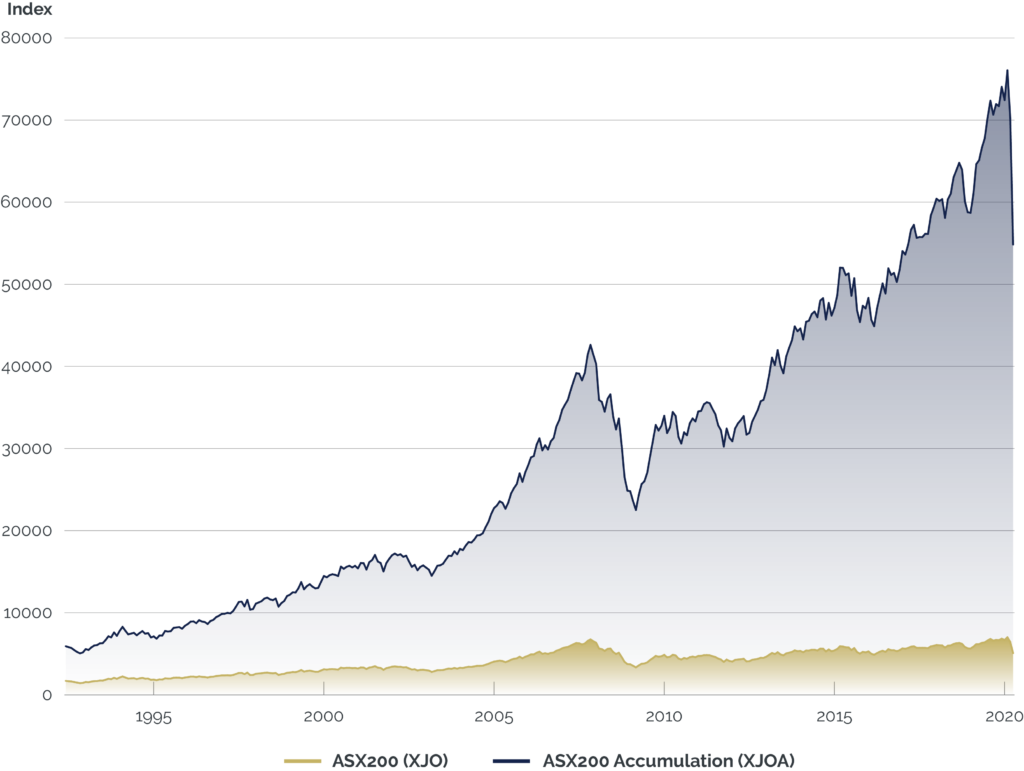 With dividends included, the ASX200’s performance has remained similarly volatile, but overall annual returns have averaged roughly 10% each year. The recovery from the GFC downturn in 2007-08 has also been more significant. This is partly due to the compounding effect of dividends having been reinvested when share prices have fallen (which ultimately enhances returns as prices eventually recover).

While the recent market downturn has been steep, it is not totally unprecedented in a historical context. While March 2020’s decline of -21% was among the fastest and steepest on records, it is still less than half the decline experienced in October 1987 (according to the All Ords data) when the market dropped -42.45% in a single month. 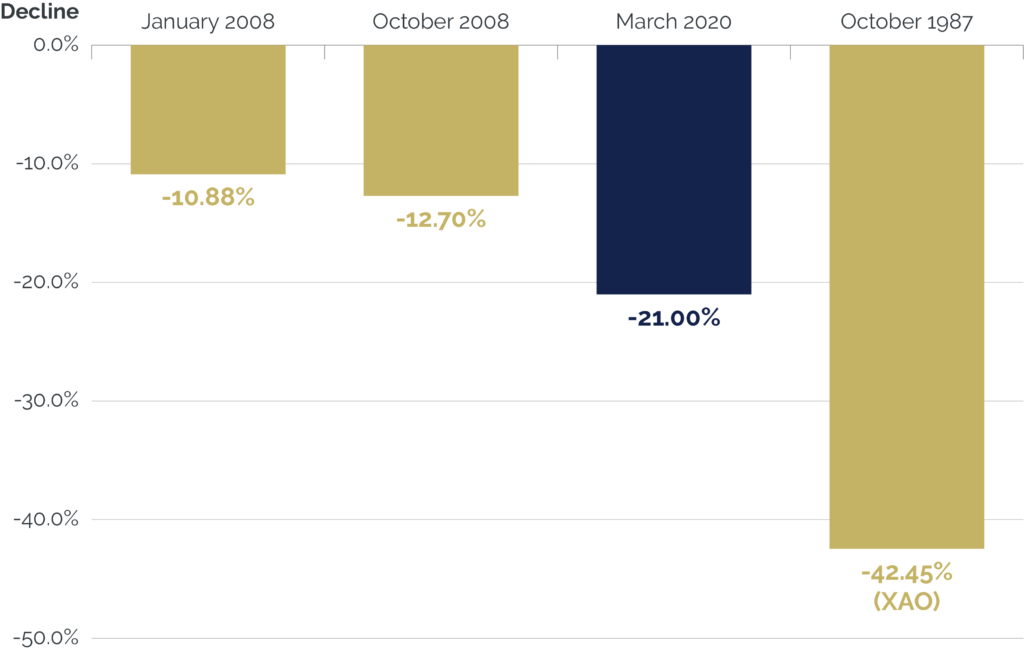 The benefits of staying invested

As we often emphasise, trying to move in and out of markets and/or pick a market top or bottom is exceptionally difficult.  It is so challenging that even professional portfolio managers seldom get this right on a consistent and repeatable basis. As a result, it’s usually counter-productive to jump out of the market (especially after a steep sell-off) and then wait for markets to “stabilise” before climbing back in.

One of the main reasons for this is that the best and worst trading days usually happen close together and are nearly impossible to identify ahead of time. As a result, if you get your timing wrong (as is most likely the case), then you run the risk of significantly hampering your returns in two ways – firstly by locking in your losses and secondly by missing out on the eventual market recovery when it occurs.

To illustrate this example, we looked at the Australian share market’s 10 worst monthly falls over the past 40 years (based on the All Ords data) and what happened in the ensuing periods. While there was obviously reasonably wide variability in experiences, in 80% of cases, an investor who held onto their exposure after these sharp declines would have more than recovered his/her losses within a year (i.e. the median gain 12 months after the down-month was +15.4%). After three years, the median total return would have been +24% and by year 5, it would have risen to +64%. 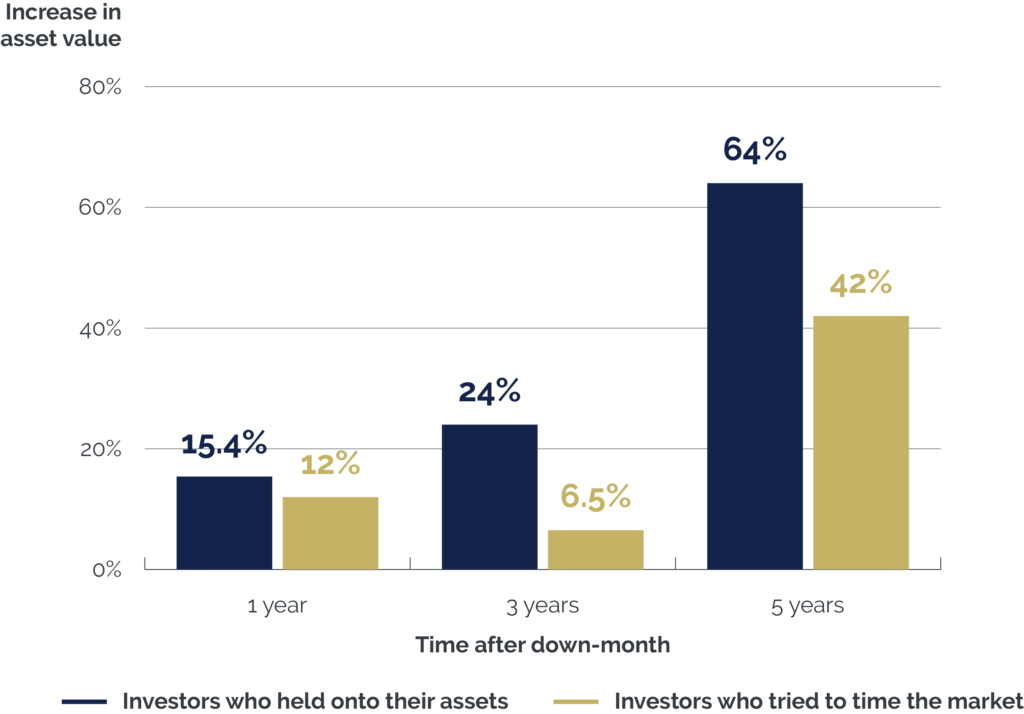 If, instead, an investor had sold down immediately after the down-month and then only reinvested after the markets had started to recover, he/she would have been far worse off.

For the purposes of the exercise, we assumed that an investor seeking to time the market would only re-enter the market once the ASX200 had recorded at least one month of positive returns (i.e. indicating signs of a market recovery). This typically would have occurred two months after the down-month but varied from one to six months across the 15 worst down-month events.

An investor who sought to time the market in this manner would typically have made significantly lower gains after the one-year point (median return of 12%) and would be up only 6.5% after three years (compared with the 24.5% with no sell-down) and 42% after five years (compared with 63%).  While this is admittedly an extreme and simplistic example, it demonstrates the downsides of trying to time the markets.

A 2018 study by JP Morgan showed that an investor who stayed fully invested in the S&P500 index from 1999 to 2018 would have earned an annualised return of 5.6% – even including the impact of the GFC. However, if that investor missed out in being invested during the ten best market days during that period, their annualised returns would fall to just 2.1%. Missing the best 20 days – less than 1% of the total trading days – would have entirely eliminated any gains made over the period.

All these statistics highlight the same point – even a simple decision like deferring an investment “until the market recovers” could mean missing out on those crucial days or weeks when the market surges – a narrow window of opportunity which most of us are unlikely to anticipate and which could have a material impact on overall investment returns.

So, what are the key takeaways as we consider how to react to the current market challenges?

It can be tough to filter out the “noise” created by sensational headlines and varying opinions. Six Park’s Investment Advisory Committee has decades of experience in doing exactly that – click the “Get started” button below to get a free investment recommendation.

The commentary in this article is general advice only. It has been prepared without considering your objectives, financial situation or needs. It is no substitute for financial advice. Where quoted, past performance is not indicative of future performance and may not be repeated.