Most professional funds managers aim to “beat the market” – that is, deliver returns which exceed a certain benchmark such as the S&P/ASX200. They might do this by selecting investments which they expect to outperform (i.e. “picking winners”) or by adjusting exposures to take advantage of expected market surges and contractions (often called “timing the market”). Or they might do both. And they usually charge high fees for access to their funds and expertise.

But do these professionals actually deliver outperformance? And is it worth paying for this expertise?

Decades of research, both in Australia and overseas, suggests that “no” is the short answer to both these questions.

While “picking stocks” and “timing the market” can deliver strong performance from time to time, the odds of being able to consistently and meaningfully outperform a passive investment approach are very slim – especially over the longer term and once fees are taken into account. There is a growing body of research which proves this point.

For example, a study by S&P Dow Jones Indices LLC found that almost 87% or more of funds in the US failed to outperform their benchmark index over the last one.

Similar studies in Australia by S&P Dow Jones have found that the vast majority of active funds in most categories (including domestic shares, international equities and Australian bonds) also fail to beat their comparable benchmark indices.

This basically means that in most cases, investors would be better off just investing broadly to track, rather than beat, a market/benchmark through index funds, such as Exchange Traded Funds (ETFs). 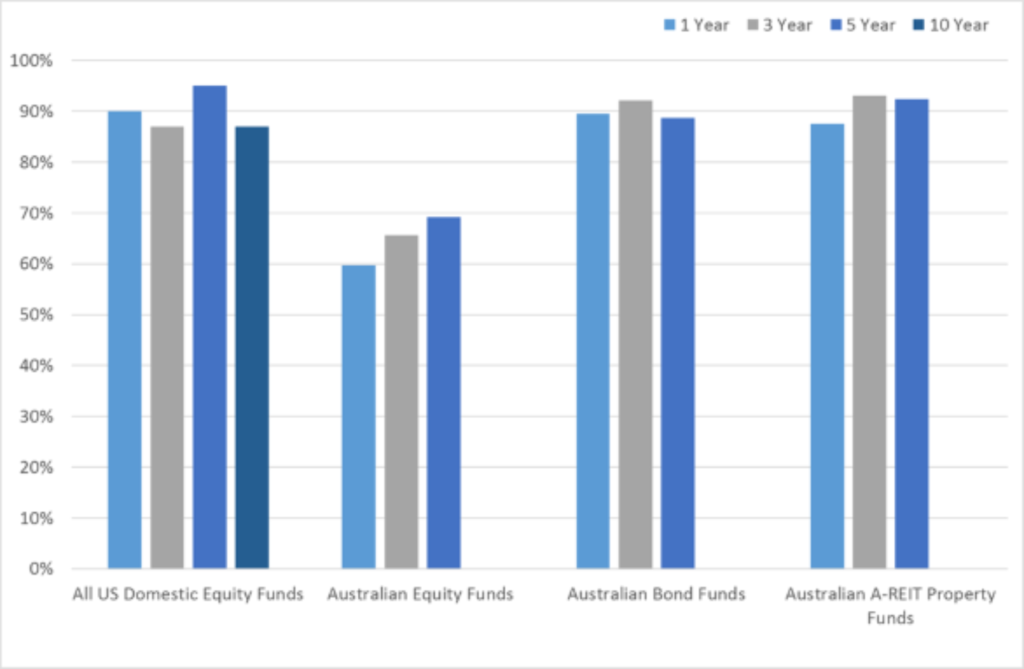 SOURCE: S&P DOW JONES INDICES SPIVA SCORECARD MID-YEAR 2016. PERCENTAGES REPRESENT THE PROPORTION OF ALL FUNDS WHOSE RETURNS HAVE UNDERPERFORMED THEIR RESPECTIVE BENCHMARK INDICES OVER THE DESIGNATED PERIODS TO 30 JUNE 2016. THE US EQUITY FUNDS BENCHMARK IS THE S&P COMPOSITE 1500. THE BENCHMARKS FOR THE AUSTRALIAN FUNDS ARE THE S&P/ASX 200, S&P/ASX AUSTRALIAN FIXED INTEREST INDEX AND THE S&P/ASX 200 A-REIT INDICES RESPECTIVELY.

While a very small minority of fund managers do manage to “beat the market” from time to time, such outperformance tends not be sustained for extended periods. It is also nearly impossible to identify in advance which managers will actually outperform the market for a particular period. A recent study by S&P Dow Jones found that less than 5% of the highest performing funds managed to retain their top quartile ranking after three years – and only 0.28% (i.e. 2 out of the 703 top quartile funds!) stayed top quartile performers after 5 years! The data also showed a strong likelihood for the better performing funds to become the worst-performing funds over time – with over 25% of the initial top quartile funds becoming bottom quartile funds by the end of the five year period.

The lesson from all this is that it’s really, really hard to beat the market consistently over time – even for experts.

It is also a lesson we have learned time and time again through the decades the Six Park team has worked in this industry. It has framed our unique approach to investing.

Our Six Park portfolios are comprised entirely of low cost exchange traded funds which aim to follow, not outperform, the market.

Our focus is on keeping costs low and offering diversified portfolios which are tailored to match our clients’ investment horizons and risk appetites.

That’s how our clients will achieve long-term wealth creation, and how Mission Improbable will become a reality.