When the COVID-19 pandemic broke out in early 2020, fear gripped markets worldwide, and the sense of dread was pervasive.

When markets turn into a roller-coaster ride, it can lead even the most experienced investors to question their investment decisions. But what’s the impact of changing your long-term strategy based on something that’s happening at a moment in time?

Using Six Park’s performance data from January 2020 to the end of September 2021 as a benchmark, we analysed three scenarios to see who fared best:

These aren’t theoretical scenarios – they reflect real people’s actual reactions in the early months of the pandemic.

Let’s step back in time to examine the three scenarios in detail.

Our hypothetical investors all kick off the new year by investing with Six Park. We choose January to start our modelling as it’s a popular time for people to start investing due to financial new year’s resolutions.

Investor A are a couple who’ve decided to invest as a way of diversifying part of their self-managed super fund. Let’s call them ‘John and Sue’.

Investor B is a middle-aged man whose risk assessment answers indicated that he’s more concerned with potential gains than potential losses. Let’s call him ‘Matt’.

Investor C is a woman in her late 20s who’s investing for the first time as a way of growing wealth outside super. Let’s call her ‘Jessica’.

We assume that John and Sue, Matt and Jessica have each invested in Six Park’s balanced-growth portfolio, which means each of them has indicated that:

– they’re planning to invest for the medium- to long-term;

– they are more concerned with potential gains than losses; and

– they are aware of the prospect of negative returns for their portfolios during market downturns, which happen from time to time.

In late February and into March 2020, markets start to slide as fears around COVID-19 build.

In mid-March 2020, total losses on the ASX200 hit -20%. Six Park’s balanced-growth portfolio is sitting at -15.6% which is less than the ASX200 has suffered individually, due to diversification across different asset classes, but still a worry for some people.

At this point, John and Sue decide to sell down their investment and sit on cash, fearing further falls during a time of global uncertainty.

Matt also decides to sell down, with the intention of buying back in when he feels that markets are more stable.

Jessica is nervous but decides to remain invested.

All three investors have suffered the same losses at this point in time, but John and Sue have now moved from a “paper” loss – in which they still hold assets, but the assets are worth less than they were previously – to an actual loss.

Markets continue to fall until late March 2020, when a slow and shaky recovery begins.

January 2021: The markets bounce back

By January 2021, markets are almost back to their pre-COVID levels, though rolling 12-month Six Park returns are still negative. Financial commentary is largely upbeat as countries around the world start to plan vaccine rollout programs.

John and Sue have remained on the sidelines, but Matt decides to buy back in at this point. While he’s missed much of the recovery, he’s feeling more comfortable about the prospect for growth in 2021.

Jessica, who stayed invested throughout 2020, has almost recovered the paper losses of the pandemic downturn and is now more than 14% better off than John and Sue and Dave, who sold down.

We finish our analysis on 30 September 2021, a year and a half after the worst of the downturn.

John and Sue have stayed in cash (down 15.6%), Matt has been back in the markets for around nine months (down 16.7%), while Jessica has not budged on her original investment strategy of keeping a long-term mindset and not trying to time the markets.

However, that’s before we include the impact of dividends. By selling their investments, John and Sue and Matt have also missed out on dividend payments.

Jessica received dividends that have boosted her total returns since investing in January 2020 to +14.5%, even after the most severe downturn in modern history.

The difference between the best (Jessica’s) decision and the worst (John and Sue’s) decision (after dividends) is a staggering 30.1%. 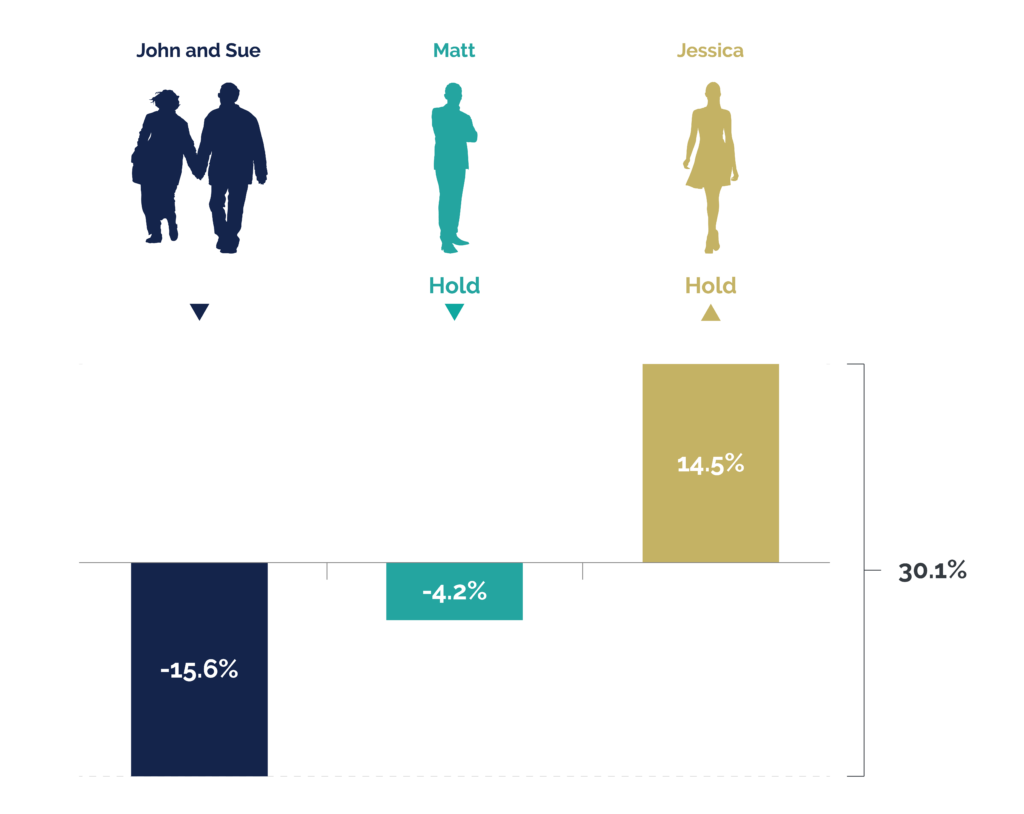 To make these scenarios as “real” as possible, we needed to make a few assumptions and pick a few moments in time for decision-making. We could have emphasised the absolute highs and lows of last year much more, but aimed to avoid “cherry picking” the most favourable results. Rather, we used the principles of behavioural economics to examine the points when people would be most likely to waver on their investment intentions or recommit after making an emotional decision.

Six Park co-CEO Pat Garrett says that, while it’s not easy to override our emotions when markets are bumpy, remaining patient and sticking with your plan are critical to long-term investing success.

1. Be patient and avoid emotional decisions

“Virus containment and the US economic recovery are the most important decision levers, and they (at that time) were unknowns, so we did emphasise the benefits of having patience and staying invested,” Pat says.

“Markets can be highly volatile, so expect the unexpected, and don’t let emotions compromise your investment plan. Volatility goes in both directions and it’s just a part of investing.”

“Investing is a long-term activity, so we advised against the temptation of the latest ‘meme stocks’,” Pat says.

“A lot of people think that DIY investing is easy but that’s not the case. Asset class returns vary over short periods, sometimes considerably; we saw this with gold, which had an extraordinary run upwards in 2020 but has fallen more than 15% since August.”

While some of the asset classes in Six Park’s portfolios were hit hard by the pandemic (such as infrastructure and global real estate), Six Park’s Investment Advisory Committee assessed that they were fundamentally sound asset classes over time and should remain as building blocks in our portfolios. We expect them to perform well as the world recovers from the pandemic.

4. Don’t try to time the market

“Steep declines are historically followed by steep and swift recoveries, so timing the market is phenomenally hard, and most experts fail to do this well or consistently,” Pat says. “This is, in part, because you have to correctly assess two things: the right time to get in and the right time to get out. If you mess up either decision, there can be major consequences.”

The Lesson to Learn: The Power of Staying Invested

When you’re making decisions about investing, performance is an important area to consider. The whole point of investing is to grow your wealth, so the way your investments perform (and have performed over time) is something that you’ll always want to know.

It’s why Six Park publishes monthly performance reports that go beyond the numbers and look at why different asset classes have had different impacts on your overall portfolio.

But month-to-month results aren’t our key focus as we manage our clients’ investments, though they’re naturally part of our analysis. Even a year is a small window of time when it comes to investing. Our Investment Advisory Committee looks at the big picture and how what’s happening at different points in time are likely to affect long-term economic and investment landscapes in Australia and around the world.

At Six Park, we typically counsel our clients – and investors generally – to tune out the “noise” of headlines and short-term events, because history shows us that markets tend to rise over time.

Looking at 2020 in hindsight provides a powerful snapshot of the power of staying invested – it’s central to investing success.