2018 proved to be a challenging year for investors. Although global markets started the year by hitting record highs in January and continued to trend upwards over the first nine months, a sharp retreat during the final quarter (amid persistent concerns over global trade and economic growth) wiped off all prior gains and saw most major indices record their worst annual performances since the Global Financial Crisis.  Up until this year, equity markets had posted above average gains of 10.6% per annum over the preceding three years, so an eventual decline was almost inevitable – especially given the inherent (but unavoidable) volatility that comes with investing in higher growth assets.

The Six Park portfolios ended the year with returns ranging from -1.4% to +1.6%.  While these results are disappointing, they reflect both a relatively short timeframe and an unusually weak period for equity markets. Over the same period, the ASX200 declined by ‑2.9%. On a rolling three-year basis, the Six Park portfolios have returned an average annual return of 3.0% to 6.0% after fees.

Global property and fixed income were the strongest performers in 2018, rising +4.7% and +4.2% respectively. Emerging markets were the weakest, declining -5.6%. This fall was in stark contrast to the sector’s +20.9% gain in 2017;  a useful reminder of the dangers of chasing investment returns based on historical performance. 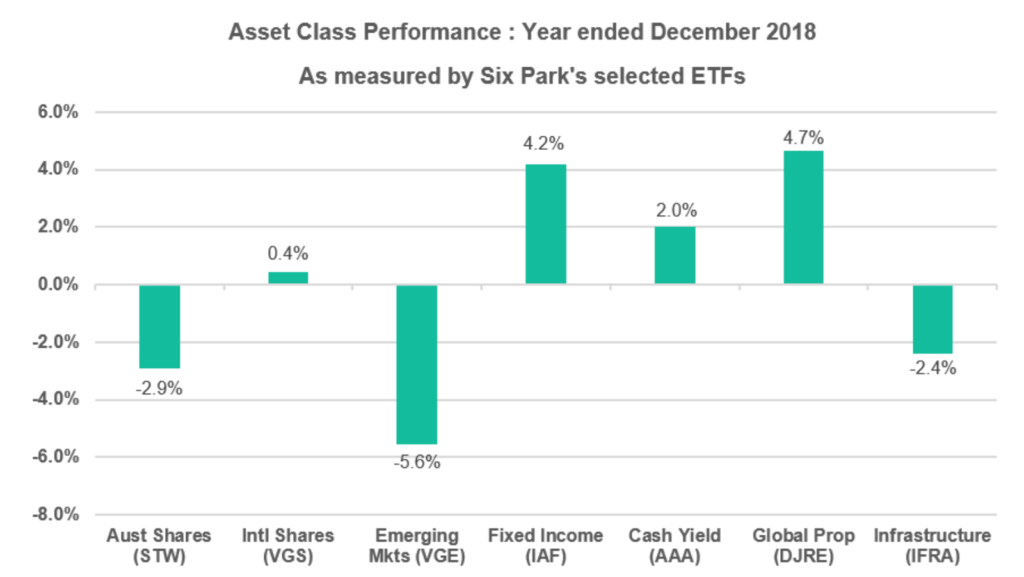 Global property was the standout asset class in 2018, gaining +4.7%.  Although the sector was not immune from the market-wide selloff during the December quarter (falling ‑1.4% over that period), it was still a major beneficiary of a broader investor rotation away from technology and other risk assets over the year (particularly in the US).  The steep fall in the AUD (which fell -9.5% against the USD over the year) was another key factor, helping to significantly increase the value of overseas real estate holdings in AUD terms.

Fixed income returned +4.2% in 2018.  Half of this gain was generated in the last quarter, as investors sought safer havens from the equity market volatility and bond investors started pricing in the possibility of a potential rate cut by the RBA given the slowdown in domestic economic growth (read more about the inverse relationship between interest rates and bond prices in our primer here)

Cash yield returns were positive but subdued over the year (+2%), reflecting the prevailing low interest rate environment and the RBA’s decision to keep rates on hold over the course of the year (and now for a record 28 consecutive months).

International shares ended the year broadly flat (+0.4%) although this headline figure masked a very steep ‑12.2% fall over the final quarter and the poor underlying performances of key markets over the year (which were largely offset by the 9.5% fall in the AUD).  In the US, the S&P 500 fell 9% in December alone, its largest monthly loss since February 2009.  The S&P500 ended the year down -6.5% overall, with a range of factors (including trade war fears, global economic concerns, reduced monetary policy stimulus and flagging demand for technology stocks) weighing on investor confidence. European markets were even weaker, with the manufacturing-heavy German DAX falling -18.3% and the UK’s FTSE100 declining -12% on Brexit uncertainty.  Japan’s Nikkei 225 index was similarly down ‑12% over the year as global growth concerns more than outweighed signs of improvement in the local Japanese economy.

Infrastructure stocks were down -2.4% for the year, driven mostly by a sharp (-3.6%) fall during December. Although the decline was significantly lower than the broader market selloff (the MSCI world index fell 7% for the month), the hedged nature of our ETF meant it did not enjoy the benefits of the AUD’s decline.

Australian shares declined -2.9% over the course of 2018. It was a rollercoaster year for the local bourse, which hit record highs in August only to ease to 15-month lows just four months later. Losses were broad-based, with only four of the 22 sub-industry sectors posting gains for the year. Pharmaceuticals and software were the key gainers (rising 31% and 5.5% respectively) while household products, telecommunication stocks and banks fell sharpest (-26.7%, – 17.4% and -15.5% respectively).

Emerging markets declined -5.6% over the year, with the AUD’s fall helping to buffer what would have been an even sharper drop. Chinese equities were down significantly on concerns over slowing economic growth (September figures confirmed the country’s slowest annual growth rate in 9.5 years) and rising trade uncertainty with the US.  Trade war fears and global growth worries weighed heavily across all other emerging markets.  Mexico was among the worst performers, with concerns over its incoming government’s new policies.  The sharp fall in crude oil prices was also a headwind for several oil producing countries (notably Russia).