Volatility returned abruptly to equity markets in February, with global sharemarkets experiencing a sharp sell-off early in the month before staging a partial recovery by month-end.  Up until that point, markets had been unusually calm, with the US S&P500 index having traded for more than one year without a 2% daily decline (compared with its longer-term typical average of seven to eight 2% down days). The local ASX200 index had not seen a daily drop of more than 2% since September 2016! Although the early February sell-off resulted in a technical market “correction” (i.e. a fall of 10% or more) in the US, the actual decline by month-end was not as marked (especially in AUD terms) and returns for global shares are still +16.7% for the year.   Against this backdrop, the Six Park portfolios fell back between -0.1% to -0.6% for the month and our rolling 12-month returns are now +2.8% to +10.4%.

Notes
(1)Past performance is not indicative of future performance.
(2)All figures are illustrative in nature based on notional $50,000 portfolios which are assumed to have been fully invested at the start of the relevant period. Your actual investment performance may vary depending on factors such as the timing of your investment with us.
(2)All figures are pre-tax but net of Six Park’s and applicable ETF fees. The results are based on closing prices for each ETF, not NAV. They assume dividend reinvestment (at month end) but do not include dividend imputation, cash holdings or annual rebalances.

The best performing asset classes in February were fixed income, Australian shares and cash yield, which all posted modest gains.  The poorest performers were global property (-2.2%) and infrastructure (-3.6%). 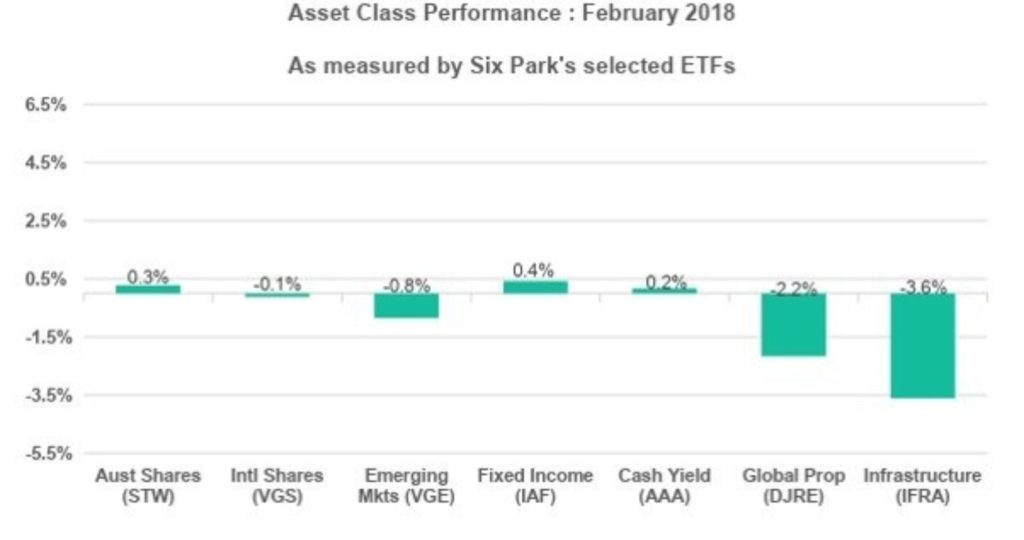 Australian shares bucked global trends, adding +0.3% for the month.  Although the US-led market correction triggered an initial -4.6% fall in the ASX200, the local sharemarket more than recovered these losses by month end. One key driver was the better-than-expected reporting season, in which more than half of the largest 200 companies upgraded their earnings and/or beat consensus estimates.  Employment data from the ABS was also encouraging, with January figures confirming that Australia had increased its job numbers for a 16th consecutive month.

International shares ended the month down -0.1%, although this figure masks the much greater volatility seen during the month. In early February, markets across the US, Europe and Asia all declined sharply, led by a -10.2% fall in the S&P500 index over nine sessions (its first technical “correction” in more than two years). This drop was triggered by unexpectedly high US wage inflation data which prompted investors to reappraise the likely pace of US interest rate rises (and their likely impact on longer term borrowing costs and economic growth).  While markets ultimately recovered a portion of these losses (on the back of resilient economic data releases), most indices still ended the month down about -3.5%. These losses were offset by a decline in the $A (which fell -3.5% against the US dollar) and helped shield our international shares ETF from similar declines.

Emerging markets fell -0.8%, dragged down by a combination of worries over US interest rates and disappointing Chinese data. Growth in China’s manufacturing sector in February fell to its weakest level in more than 18 months, prompting some concerns over a potential slowdown in the world’s second largest economy.

Global property declined -2.2% for the month.  This was mostly the result of a 7.2% decline in US real estate stocks, which fell heavily as investors sought to reduce their exposure to defensive “interest rate-sensitive sectors”.

Global infrastructure fell -3.6% for the month.  Like US real estate, infrastructure stocks were caught up in the general market sell-off and the headwinds of rising interest rate expectations (which can reduce the short-term attractiveness of defensive investment sectors such as infrastructure).