Equity markets fell for a second successive month in March, with three events – Trump’s announcement of new trade tariffs, a rise in US interest rates and a revelation of privacy breaches at Facebook – sending jitters across markets and pushing local and international shares down sharply.  The impact of these losses on the Six Park portfolios was partly offset by gains across global property and fixed income.  Returns for our portfolios ranged from +0.1% to -1.8% for the month.  On a rolling 12-month basis, returns stand at +2.3% and +6.4%. This compares favourably to returns on the ASX200 alone (up just +2.3% over the same period) and highlights the benefits of being diversified across multiple geographies and asset classes.

Global property was the standout performer in March, posting a monthly gain of +4.3%.  Australian and international shares were the weakest asset classes, falling -3.8% and ‑2.4% respectively. 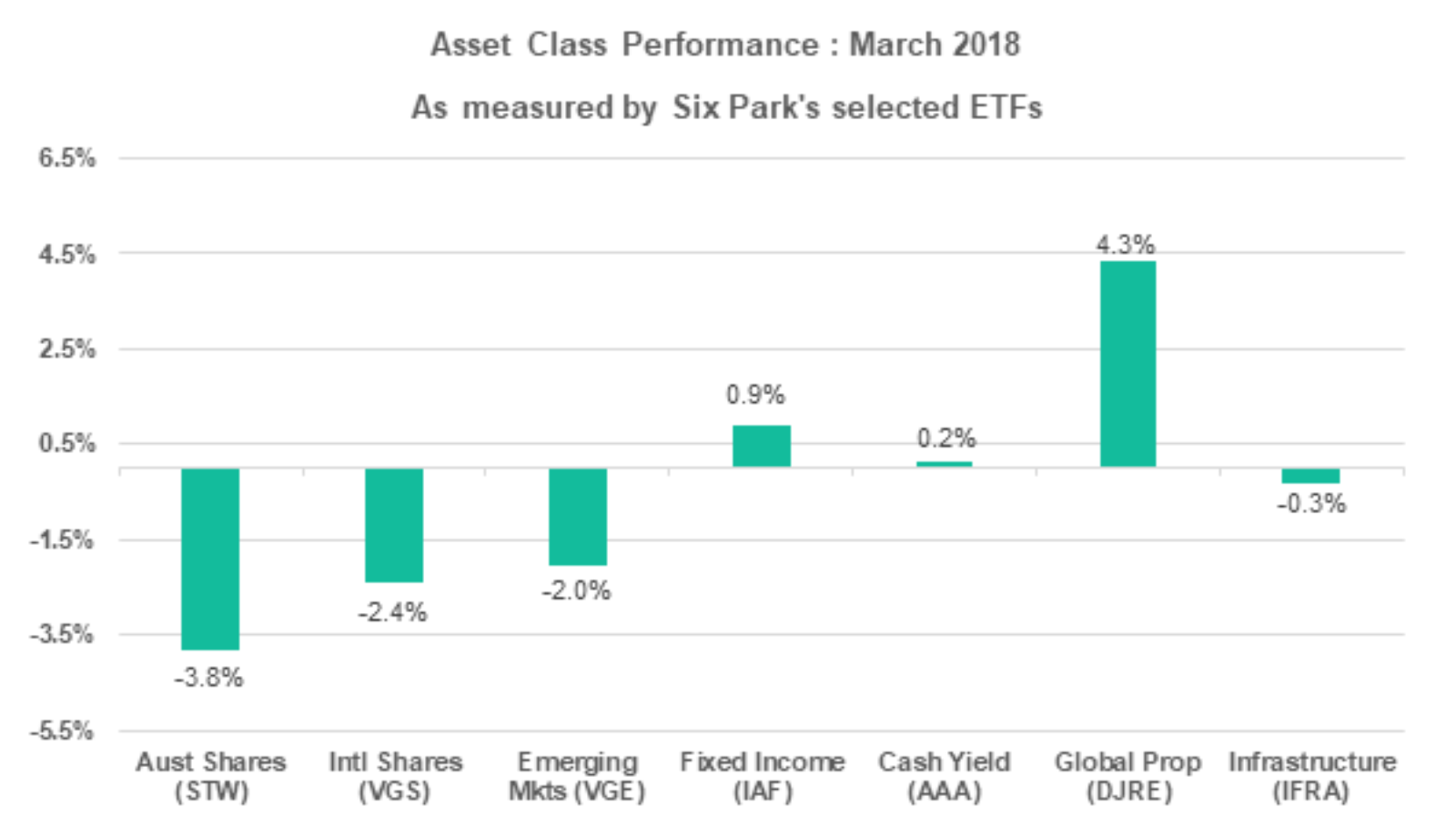 Global property rallied sharply in March, gaining +4.3% for the month.  Real estate markets across the US, UK and Germany were particularly strong, with concerns of a potential global trade war boosting demand for defensive assets such as property.  Sector returns were also bolstered by a 1.6% decline in the AUD (which increased the value of overseas assets in local currency terms).

Fixed income gained +0.9%. With inflation continuing to run below the Reserve Bank’s target band of 2% to 3%, market observers do not expect the RBA to begin raising interest rates until later this year (at the earliest).  Since bond prices are generally “inversely related” to interest rates (read more here), this helped boost domestic bond prices in March.

Our cash yield ETF posted a moderate gain of +0.2%. With the RBA keeping cash rates on hold for a 17th consecutive month, interest rates on local savings accounts remain muted.

Global infrastructure was down slightly, falling -0.3%.  Although the sector benefited from a broad shift towards defensive assets, this was offset by weakness across four of the five largest stocks in the portfolio. In particular, Transurban (which is the largest single holding in our infrastructure ETF) fell ‑1.3% during the month on concerns over its toll road acquisition in Canada.

Emerging markets fell -2.0% over the month. The sector was dragged down by Chinese equities, which were impacted by rising trade tensions with the US, and weakness across Indian shares, which lost value following a government decision to reinstate capital gains tax.

Global shares declined -2.4%. Selling pressures were triggered first by Trump’s tariff proposals (which investors feared could trigger a trade-war and impact economic growth) and later by the Federal Reserve’s interest rate rise and revelations of data breaches at Facebook (which raised the prospect of greater regulation of technology companies). These factors saw the S&P 500 register a decline of ‑2.7% over the month, with similar losses experienced across European exchanges.  Japanese equities fell -4.1%, with investors shaken by a resurgence of concerns regarding Prime Minister Abe’s involvement in a land sale scandal and a slight softening in quarterly growth figures. The weaker AUD helped to slightly soften the impact of these falls in local currency terms.

Australian shares posted their worst monthly performance in two and half years, declining ‑3.8% in March. Losses were recorded across all 11 industry sectors. A fall in commodity prices led to weakness across resource stocks while financial stocks weakened as the first substantive hearings for of the royal commission commenced.  These losses resulted in the Australian sharemarket posting its weakest quarterly performance since 2015 and its worst March quarter since the GFC in 2008.