Thomas Dekker might not have been referring to the sharemarket when he penned his famous poem in 1599, but his description was remarkably appropriate last month. Equity markets continued their rebound during May, with global property and local shares leading the charge and all but two asset classes posting positive returns.

After strong returns through April, Emerging Markets (particularly sensitive to geopolitical risk and fear of prospective trade wars) were down materially in May, while infrastructure was down -0.1%. Overall, the Six Park portfolios gained +0.3% to +0.5% over the period and are now up between +1.3% and +2.0% over the quarter.

Global property was the strongest performing asset class in May, rising +1.4%. The emerging market segment was the weakest, sliding -3.3%. Despite this fall, the sector has still delivered returns of more than +8.5% over the past 12 months. 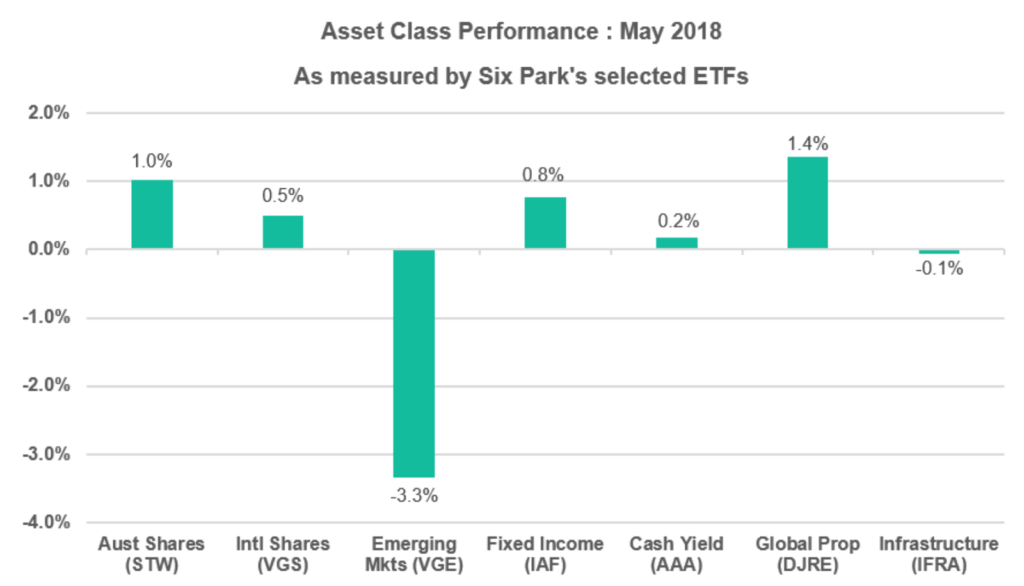 Global property returned +1.4% in May, with UK, Canadian and US real estate markets all making strong gains.  After a weak start to the year, the sector has now added +9.4% in just three months, buoyed by a continued strengthening in the global economy and heightened merger and acquisition activity.

After a weak March quarter, Australian shares posted a successive month of gains, adding +1% in May.  The strongest performing sectors were consumer stocks, which rallied on Amazon’s decision to stop shipping overseas goods to Australian consumers from July, and healthcare stocks, which gained on strong profit upgrades from CSL.

Fixed income added +0.8% during May. Local bonds followed the lead of global bond markets, which rallied as investors sought out defensive assets on the back of lingering US/China trade war concerns and growing political uncertainty in Italy.

Global shares were mixed but ended the month up +0.5%. US markets advanced strongly, with the S&P 500 rising +2.4% on the back of encouraging economic data (including a fall in the US unemployment rate to levels not seen since December 2000) and a solid end to the corporate earnings season.  European and Japanese shares were weaker, weighed down by political uncertainty in Italy (with the appointment of a new populist government raising concerns of the country’s future in the EU) and lower than expected industrial production figures in Japan.

Emerging markets fell -3.3% in May. While Chinese and Russian equities both rallied (aided by positive economic data releases and oil price strength), those gains were more than offset by falls across other markets.  Brazilian equities were especially weak as the impact of a major truck driver strike threatened to paralyse the nation’s economy.