Global equity markets fell sharply in October, as concerns over slowing economic growth, escalating US-China trade tensions and worse-than-expected earnings of several US tech giants rattled investors and triggered one of the worst monthly sell-offs in six years. Although gains across fixed income, cash yield and global property helped provide some buffer, the Six Park portfolios ended the month down ‑0.6% to -5.0%. Not surprisingly, losses were sharpest across our higher risk portfolios, an unfortunate but unavoidable corollary that comes with being exposed to higher growth, more volatile asset classes.

On a rolling 12-month basis, our portfolios are up +2.5% to +3.6%, reflecting both the impact of this month’s market retreat and the drop-off of the strong gains of October 2017 when US markets hit (then) record highs and our portfolios gained +0.9% to +3.5% in one month alone.  What a difference 12 months can make!

While recent market declines are naturally unsettling, we continue to believe that the overall economic backdrop remains fundamentally positive and now is not a time for panic or emotionally driven economic decisions. 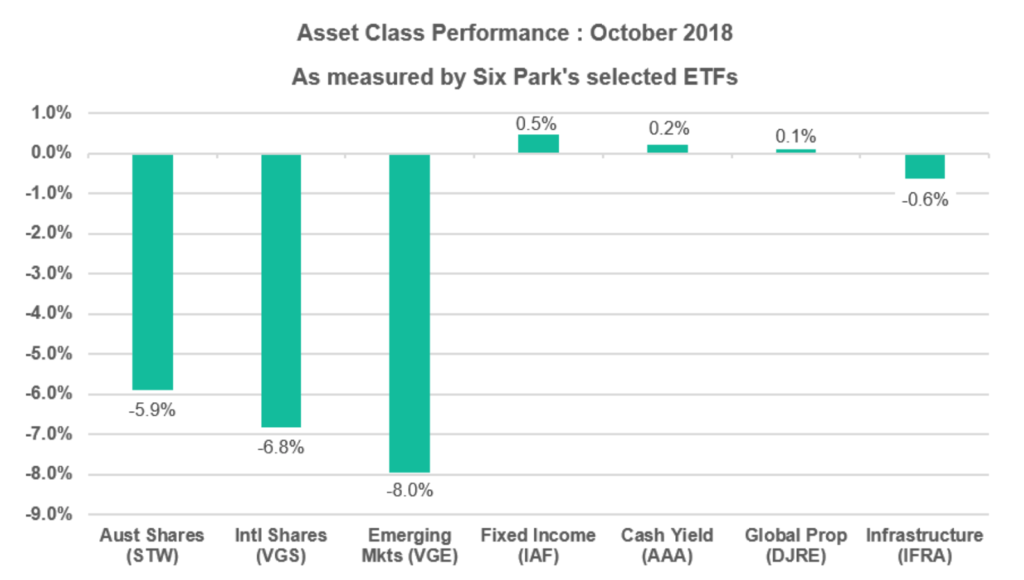 Fixed income assets gained 0.5% in October, primarily on the back of benign domestic inflation figures that helped give investors confidence that the RBA is unlikely to raise interest rates in the near term. Rising interest rates have a negative impact on bond prices (read more about the inverse relationship between bond prices and yields here) so any delay in rate rises typically helps  boost fixed income values.

Global property eked out +0.1% gain for the month. Most real estate sectors in the US and Europe were caught up in the broad wave of negative market sentiment, but losses were generally more contained across the REIT sector and were also offset by a 1.9% gain in the USD (which increased the value of these overseas assets in local dollar terms).

Infrastructure stocks were down -0.6%. US utility companies were weak (impacted by concerns of more expensive debt servicing in a rising interest rate market) but these losses were largely offset by gains across transport and energy stocks (which advanced as investors sought more defensive asset opportunities).

Australian shares slumped -5.9% in October, racking up their worst monthly performance in more than 3 years. Losses were widespread, with all 22 sub-industry sectors closing in the red. Media and auto stocks were the weakest, falling -16% and -12% respectively.

International shares experienced one of their sharpest monthly declines since the GFC. In the US, the S&500 lost -6.9%, its largest fall since September 2011, while Japanese and German indices were down -9.1% and -6.5% respectively. Overall, global markets fell -6.8% in AUD terms and were even lower on a local currency basis (with the falling AUD providing some small buffer). Risk sentiment deteriorated dramatically across the month as investors reassessed the potential impact of various issues, including escalating US-China trade tensions, rising interest rates, the end of quantitative easing programs by several central banks, as well as some potential early signs (particularly amongst technology companies) that corporate earnings may have peaked in the US.

Investor uncertainty weighed most heavily on emerging markets, which declined -8.0% over the month. The sector has now more than erased all its earlier strong gains for the year.  Chinese stocks were particularly poor following the release of the country’s weakest annual economic growth figures in almost 10 years (albeit still a growth figure of +6.5%!).  Mexican equities were also sold down sharply on concerns of the impact of its incoming government’s new spending policies.