September brought spring to Australia but a “fall” across local sharemarkets, global property, infrastructure stocks and bonds. While these losses were somewhat offset by gains across international equities and emerging markets, the Six Park portfolios ended the month down slightly (‑0.3% to -0.5%).  Despite these declines, our portfolios were still up between +0.8% and +3.3% for the quarter and have delivered a pleasing +4.2% to +13.0% on a rolling 12-month basis.

The standout asset class in September was international shares, which added another +1.3%.  Global property was the weakest asset class, falling -2.9% for the month and giving up most of the strong gains seen in August (+4.7%). 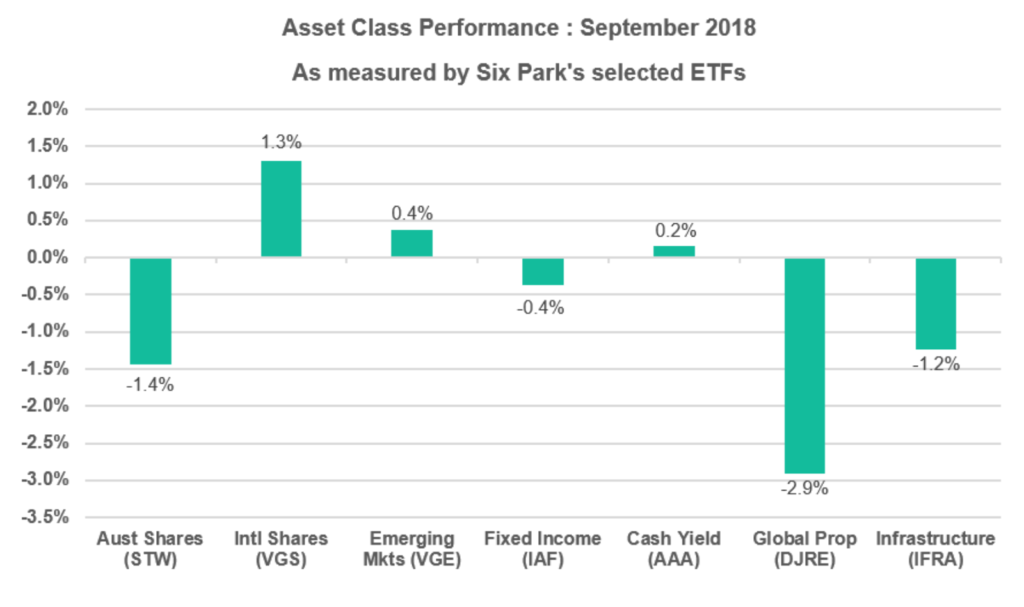 International equities gained 1.3% in September, aided by rallies across US and Japanese markets.  While escalations in the US-China trade war dominated headlines (with both sides announcing further tariff measures), it failed to dampen investor sentiment.  Encouraging US manufacturing and wage data helped propel the S&P500 and Dow Jones Indices to record highs.  Meanwhile in Japan, markets were buoyed by a weakening local currency (which helped improve export competitiveness) and by the re-election of Prime Minister Abe (which removed fears of political instability). International equity markets have now returned more than +22.0% for the past 12 months, significantly outpacing all other asset classes.

After a weak August result, emerging markets rebounded +0.4% in September.  There was a wide divergence in performances across regions.  Latin American and Eastern European markets posted solid gains, aided by commodity price gains. Chinese and Indian equities were weaker, with the former held back by escalating trade tensions with the US and tighter credit availability, and the latter by rising oil prices (India being a large net importer of oil).

Fixed income returns were down -0.4% for the month, a function of the rise in bond yields during the month (which had a negative impact on bond prices – read more about the inverse relationship between bond prices and yields in our primer here). Cash yields were also subdued, with the RBA again electing to keep local rates on hold.

Australian shares fell -1.4% in September, the market’s first “down month” since March this year. Losses were widespread, with rising oil prices, concerns over the potential fallout from the Banking Royal Commission and the US-China trade war all weighing on investor sentiment.  Only four of the 22 sub-industry sectors posted gains, led by energy (+4%), capital goods (+3.7%), and telecommunication (+2.9%).

Infrastructure stocks fell -1.2%, dragged down by weaker US utility stocks. Utility companies often have heavy capital expenditure requirements and, as such face, more expensive debt servicing (and ergo lower profitability) in a rising interest rate market (like in the US at present).  Transportation stocks were also impacted by rising oil prices.