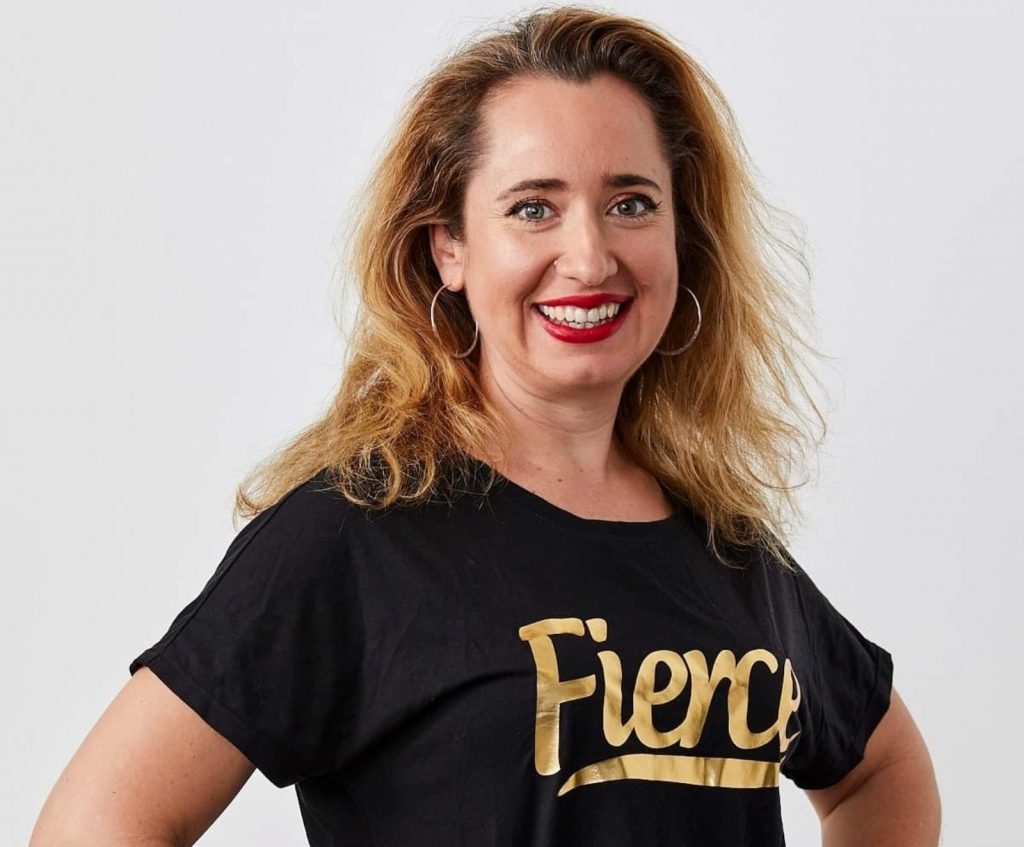 Fierce Girl was started in 2016 by Chief Fierce Girl Belinda White. Belinda, who has studied arts and applied finance, shares her story and learnings with Six Park head of communication Erika Jonsson.

I didn’t really get proper pocket money as a kid, but when I was 13 I started working at a printing shop for $5 an hour and I saved up for a boom box – it was a double-cassette plus CD player, so I could use it to make mix tapes. I reckon it took me about six months and I had it until well after I moved out of home, so it was a pretty good purchase!

WHO WERE YOUR FINANCIAL ROLE MODELS WHEN YOU WERE GROWING UP?

My mum deferred everything to my dad financially – he was the main income earner and worked in finance for most of his career. In reality, my parents were probably role models of how I didn’t want to be with money when I grew up. They divorced more than 20 years ago; he walked away from the marriage with the ability to earn more money, and my mum walked away with far less earning capacity.

I learned about money by osmosis – there weren’t really talks or learning about money in our home. I do remember coming home one day in year 12 to find Dad with all this paperwork on the table after buying shares in BHP. I was this lefty hippie student telling off my former hippie dad for buying BHP shares when the environmental damage being caused by the Ok Tedi Mine in PNG was becoming clear. I guess the lesson there was that every man has his price.

WHAT PROMPTED YOU TO START THE FIERCE GIRL’S GUIDE TO FINANCE?

I was doing work on what was then called Money Smart Week, and one of the things they asked everyone to do was have workplace events. So I got a bunch of PR girls together and ran these lunchtime seminars preaching the gospel of superannuation and it went from there.

In terms of launching the blog, I started out treating myself as though I was a client and considering my objectives and channels. But perfect is the enemy of done, so I just ended up starting and building the site myself (which is why it’s not very fancy).

Not that long ago I was listening to Gloria Steinem in conversation with Oprah, and her advice was: “Do the thing that only you can do.” There are so many strands to unpick before we can get close to gender equality, but the thing that I can unpick is helping women realise it’s not unfeminine to be good with money. I want to change that thinking that says we’re all about spending. Money is at the core of how much power we have.

WHY DO YOU THINK EXPENSIVE SHOES (THINK LOUBOUTINS AND MANOLOS) HAVE BECOME SUCH AN IMPORTANT REFERENCE POINT IN TALKING TO WOMEN ABOUT MONEY?

My theory is that it’s women signalling success to other women. I think women are particularly socialised to talk about how we spend money but not about how we make it or invest it. But money itself doesn’t signify power; it creates power by giving you choices and opportunities. If you’re spending that money on shoes that aren’t even very comfortable, you’re not taking control of that power fully.

One of the things that troubles me a lot at the moment is the obsession with cosmetics and injectables and really expensive beauty treatments. I’m not judging women who use these services, by the way, but every time you’ve got a 26-year-old woman getting Botox, it’s a way to disempower her, because she’s now embraced a spending pattern that will last through her 20s and beyond. We’re talking about hundreds and hundreds of dollars being spent, mostly by women, who think this is what they need as a minimum to show up in the world. It’s fine if you have all the money – great, go get a facial – but don’t do that before you’ve paid your bills and set yourself up for a life that will give you power and opportunities.

FIERCE GIRL IS FULL OF GREAT POP CULTURE REFERENCES, INCLUDING ICONIC FILMS AND SERIES SUCH AS LEGALLY BLONDE AND SEX AND THE CITY. WHO ARE YOUR FAVOURITE CHARACTERS AND INFLUENCES WHEN IT COMES TO MONEY?

One of the biggest singers in the world at the moment is Billie Eilish, who’s quite androgynous, and I find that really exciting – she’s giving a different version of femininity that’s not all about crop tops or high heels. When it comes to money, though, the women I admire the most are probably Beyonce and Rihanna. They’ve kept control of their business decisions and their empires and they’ve flipped the narrative. I know that’s a very capitalist way to look at things but if women can take away even a small amount of the thinking that says money isn’t about what you can spend but about the choices and opportunities it gives you, we’d all be better off – we’d all be a bit more Beyonce, right?

YOU WROTE A POST ON SPENDING LESS AND SAVING MORE THAT WENT “LOW-KEY VIRAL” – WHAT ARE THE MOST POPULAR POSTS ON THE BLOG, AND WHY DO YOU THINK THEY’VE RESONATED THE WAY THEY HAVE?

The one I wrote about how to structure your bank accounts was wildly popular – it’s not rocket science, but it was a great simplification of how to think about things. By far the most popular ones, though, are the ones that are the most personal, including a recent post about the single biggest risk to your money. As someone who’s come out of a divorce, I’m fortunate to have an income and a career, but I didn’t come out of that situation in what I thought was a very fair way. If I could go back in time I would have protected myself a bit more. I think people really resonate with the authenticity of those kind of blogs. People connect with people, not instructions or tables – they want to hear stories.

I’ve been putting extra into my super since I was 21 – though I lost a decent chunk of that in my divorce – and everything else has gone into my house. Other than a little Raiz account, I’m probably overweight in property! A lot of my wealth has gone into my home, but I’ve done that quite consciously because I do have a decent amount of super so I just really want to smash my mortgage while I can. When I feel like I’ve done that a bit more, I’ll probably go outside and invest in ETFs.

HAVE YOU EVER WRITTEN ABOUT BUYING FEWER COFFEES?

No! I’m not going to tell you how to write your Mindful Spending Manifesto! You need to decide what’s your splurge and enjoy it – then be clear about what you’re having and not having. You should see my premium spirits sideboard – there’s nothing on there that’s less than $70 or $80 a bottle, but I won’t buy cocktails at a bar. Everyone has their own thing that they have to work out. You shouldn’t have to feel bad about the things that make you feel good about your life, but you should put time and effort into thinking about them. Ask yourself whether the behaviours you’re engaging in bring you closer to your goals or push you away from them.

WHAT’S THE ONE THING YOU WANT EVERYONE TO KNOW ABOUT MONEY?

The thing I really want women to believe is that perfect is the enemy of done. There’s no perfect investment, there’s no perfect way of doing things – just do something. Don’t wait to be a perfectly informed investor – you don’t have to be Warren Buffett; there are so many small things to do like reviewing the dull insurance and consolidating your super. Get in there and have a go. You can always do a little bit better without having to be perfect.

Start your investing journey with Six Park by clicking the “Get Started” button below.