Australian Shares, Global Infrastructure and Emerging Markets led the charge in March. International Shares, Fixed Income/Bonds and Cash Yield notched solid, if not spectacular returns.  Globally Listed Property was the noteworthy underperformer. The Six Park Portfolios advanced +0.5% to +1.7% in March. Our portfolios are now up +4.0% to +14.3% on a rolling 12-month basis, reflecting the benefits of our low cost, globally diversified approach to investment management

(2) No rebalancing, cash holdings or trading costs are included. The calculations are based on the published closing prices for each ETF, not NAV. They assume dividend reinvestment. 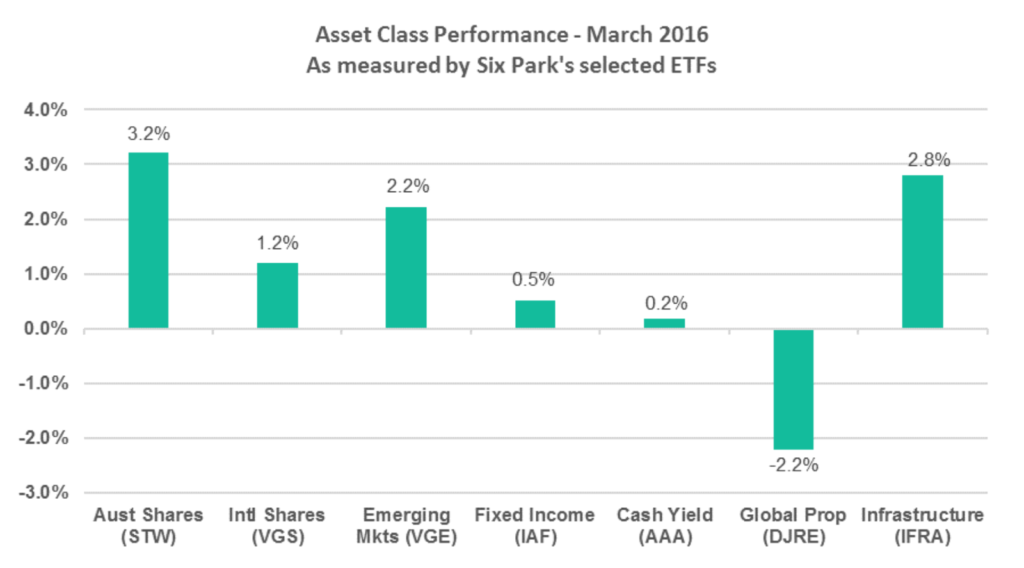 Australian shares led the charge in March, up 3.2%, and now up 20% for the rolling 12-month period.  Inflation remains subdued, and defensive utilities and healthcare sectors drove March returns.

Global infrastructure stocks continued their strong performance on the heels of February, up 2.8% in March.  Despite the modest increase in interest rates, infrastructure assets remain appealing to investors.  There remains a focus on whether Trump will be able to actually implement his ambitious infrastructure plans.

Emerging markets continued to produce strong returns, up +2.2% in March, and are now up 18% for the year. The sector continues to benefit from expectations from an improving outlook for global growth and economic trade.

International shares ended the month up +1.2%.  The US S&P 500 was flat for the month, and European markets were up marginally with the ECB continuing its stimulus measures.  The Hang Seng index (China) was up over 1% in March, whilst the Nikkei index (Japan) was slightly down for the month.

These gains were slightly aided by the 0.3% weakening of the AUD, which increases the value of overseas gains.

Returns across our bond and bank deposit ETFs were slightly positive (up +0.5% and +0.2% respectively), reflecting prevailing interest rate sentiment.

Global listed property declined (2.2%) in March, the only negative performance result of our asset classes. This was driven largely by poor performance with US REIT stocks, which were hit harder by the interest rate hike and concerns about the impact of e-commerce on the bricks and mortar businesses.