After six months of heightened turbulence, investors finally saw market volatility subside during the September quarter. Equity markets rallied strongly over the period, supported by ongoing signs of a moderate but persistent global economic recovery, highly supportive central bank monetary policy and a rebound in commodity prices and investor sentiment. At the same time, yields across most global fixed income markets fell to new record lows, with upwards of 70% of developed-market government bonds now estimated to be trading on yields of 1% or lower. These falling yields continue to create challenges for investors seeking to balance their risk/return objectives amidst the current low interest rate environment.

The Six Park portfolios returned between +1.0% to +2.9% for the September quarter, with those portfolios with higher equity weightings (namely our higher risk/return portfolios) benefiting most from the strong performances of Australian and emerging market equities.

Over a rolling 12-month period, returns across the portfolios are now +5.0% to +7.8%. These figures are above our long term annual “targets” for all portfolios – a result which is particularly pleasing given the historically low investment return environment in which they were generated. They are also a further testament to the benefits of low cost, carefully constructed and globally diversified investing.

Notes:  (1) The above figures represent an estimate of our historical portfolio performances. The actual performance of your portfolio may vary from these returns due to factors such as the timing of your investments. Past performance is also not indicative of future performance.  (2) The returns are pre-tax estimated returns based on Six Park’s asset allocations (including adjustments made during April 2016) and our current ETF selections. They include an allowance for Six Park’s fees (assuming a notional fully invested existing account of $50,000) and are net of applicable ETF fees.  (3) No rebalancing, dividend reinvestment, cash holdings, trading costs or additional investment contributions are assumed. Where available, the figures are based on the historical closing prices of our chosen ETFs (not NAV) and published distributions. For periods predating the inception of our chosen ETFs, we have used index returns and/or alternative proxies with adjustments for ETF fees. Returns for periods longer than 1 year are annualised 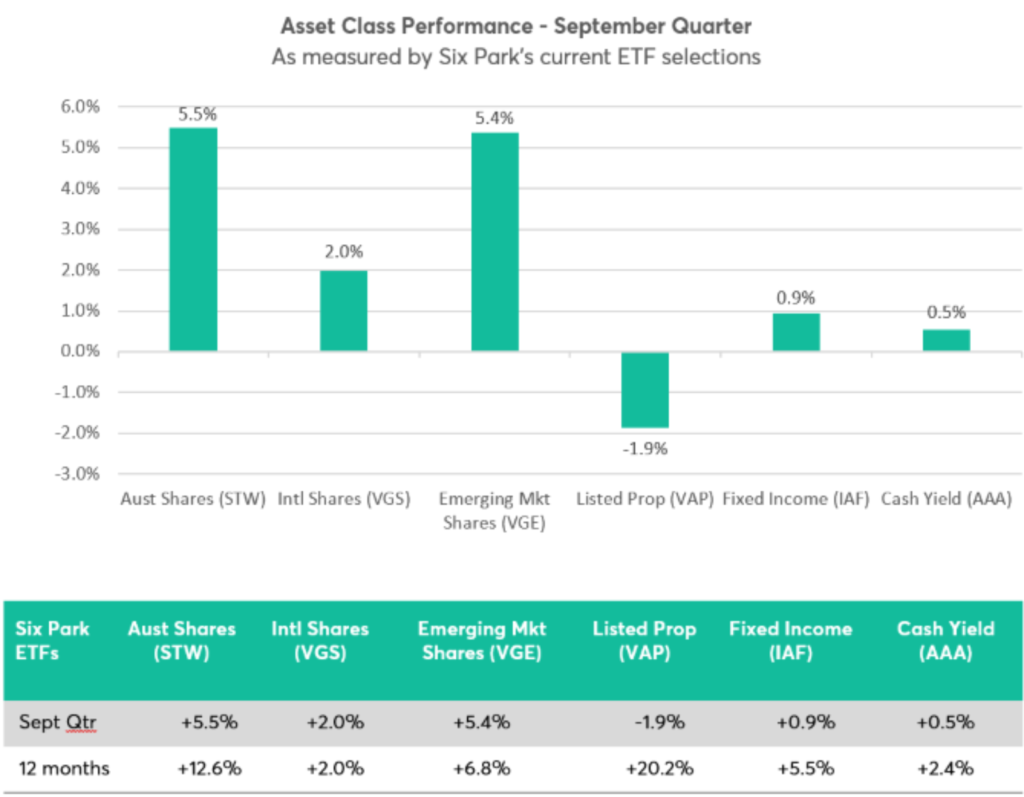 Notes:  (1) Our reported ETF returns may differ slightly from those published by the ETF issuer. These differences are driven by (i) our use of closing share prices rather than NAV (which we believe to be a more relevant proxy for investor performance calculations) and (ii) the fact that the ETF issuer returns incorporate the impact of dividend reinvestment whilst our figures do not.

• Australian Shares: The S&P/ASX200 returned +5.5% for the September quarter. The majority of this gain came in July, when a combination of a benign CPI result, improved commodity prices and a recovery in investor sentiment post-Brexit and the Federal election uncertainty combined to drive the local sharemarket up +6.4%, its strongest month in almost 5 years. The following 6 weeks were characterised by general weakness (despite a mostly solid earnings season) and saw the sharemarket reverse much of its earlier gains, particularly amidst weakness in the utilities and industrial sectors. The market staged a strong recovery in the last two weeks of September, buoyed by optimism around commodity prices, further monetary stimulus from the Bank of Japan and expectations of a US Federal Reserve rate rise before the end of 2016. Overall, our ASX200 shares ETF (Ticket code STW) has returned +12.6% for the rolling 12-month period.

• Global equities were up +2.0% for the quarter, supported by solid advances across all major developed markets. Overall gains would have been even stronger were it not for a +2.2% appreciation in the AUD over the period. In the US, the S&P500 index was up +3.1% on the back of mostly better-than-expected economic data and indications of a Federal Reserve’s interest rate rise before year-end. Japan’s Nikkei 225 rose almost +5%, with the ruling LDP-Komeito’s convincing Upper House election result paving the way for a significant fiscal spending and structural reform program to supplement the Bank of Japan’s ongoing aggressive monetary policy stance. In the UK and Eurozone, equity markets were also strong. The FTSE100 rose +5.2%, largely on the back of more extensive monetary policy easing by the Bank of England. The German DAX also gained +7.5%, supported by a rise in economic confidence, encouraging bank lending growth statistics and a generally positive reporting season.

• Emerging markets performed strongly during the September quarter with VGE, our chosen ETF, advancing +5.4%, notwithstanding the AUD’s appreciation. Chinese markets outperformed, helped by strong industrial profits and improved consumer confidence. Brazilian and Indian markets were also both up strongly, the former boosted by a Senate vote to impeach and permanently remove President Rousseff and the latter buoyed by encouraging economic data. OPEC’s surprise announcement of a plan to cut oil production also helped provide late quarter support to most emerging market economies.

• Australian listed property underperformed the broader sharemarket during the quarter, with our A-REIT ETF (Ticker VAP) falling -4.2%. This decline reflected a combination of factors. Growing expectations of US interest rates rises (and associated rising bond yields) reduced the sector’s “bond-like” defensive characteristics and overall attractiveness. Earnings results, particularly amongst the larger retail REITs were also weaker than expected. Westfield Corporation and SCentre, which represent a combined 36% of the index, were particularly weak, falling over 9% and 5% during the quarter respectively. The A-REIT index was also impacted by John Gandel’s unexpected sell-down of Charter Hall. This move saw Charter Hall (which makes up ~2% of the index) fall 12% in in September. Notwithstanding this quarterly decline, the A-REIT sector remained the strongest performing asset class over the last 12 months, up +20% for the period.

• Fixed income returns were lower over the quarter, with our selected bond ETF (iShares’ composite Australian bond index fund, IAF) adding +0.9% compared to +2.9% in the June quarter. During the quarter, the RBA cut interest rates by a further 25bps, thereby reducing the official cash rate to a new record low of 1.5%. This interest rate cut was largely expected and provided a positive backdrop for bond prices (given their inverse relationship with interest rates). Over the rolling 12-months, IAF was up +5.5%, largely reflecting the ongoing “flight to safe assets” and strong offshore demand (particularly with so many overseas bond markets offering near zero, if not negative yields).

• Cash Yield: Amidst the current low interest rate environment, our bank deposit ETF (Betashares’ AAA fund) returned +0.5% for the September quarter, slightly ahead of its benchmark. Overall returns for the AAA fund remain muted, with the rolling 12-month return down slightly to +2.4%.