Over time, it is likely that the assets in your portfolio will each deliver different returns, particularly as markets move and certain holdings outperform others.

When this happens, the composition of your portfolio will tend to drift away from its target asset allocation mix. This can inadvertently increase your portfolio’s risk exposure, particularly if the mix becomes concentrated towards higher risk (and potentially overpriced) asset classes and underexposed to more conservative investments.

For this reason, it is important that portfolios be periodically “rebalanced” back to their target asset mix.

A wealth of research studies have shown that portfolio rebalancing tends to generate higher returns over the longer term, and with lower overall risk.

One respected international paper by Burt Malkiel and Charles Ellis demonstrated that rebalanced portfolios generated an average of 0.4% more per annum over a ten-year period (1996 and 2005) – and with less volatility – than portfolios that were allowed to drift. Numerous other studies (e.g. Plaxco & Arnot 2002, Swenson 2005; Forbes 2011) have found similar results over different time periods.

OUR APPROACH TO REBALANCING

If you’re a Six Park client, we take care of rebalancing your investments with us. We continually monitor the asset mix in your portfolio and will rebalance your holdings as and when necessary (typically at least annually) to ensure your funds are allocated in line with your intended risk/return profile.

The timing on any rebalancing will depend on several factors, such as the relative performance of your holdings, how significantly they might have drifted from our target thresholds and the time remaining until your next annual review.

We aim to minimise unnecessary transaction costs and tax consequences wherever possible – since these factors can offset the benefits of more frequent rebalancing. As part of our approach, we also minimise the extent of any rebalancing trades by directing any of your new investments into underweight asset classes and by favouring overweight asset classes as the source for any fund withdrawals. 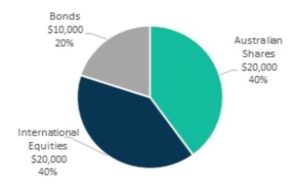 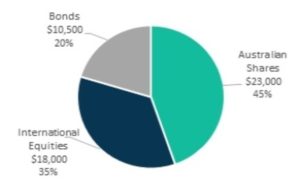 At the end of year 1 point, Meg could rebalance her portfolio back to her original targets by selling some of her Australian shares (and a minor portion of her bonds) and using the proceeds to buy more international shares. In this example, she would sell $2,400 worth of her Australian shares and $200 of her bonds so that these assets once again represent 40% and 20% of her portfolio (i.e. $20,600 and $10,300 of her $51,500 portfolio respectively) – ignoring tax and transaction costs to keep things simple.

Alternatively, she could choose to do nothing.

A popular belief amongst many is that if an investment has performed well over a year, it should perform well again the next year. Unfortunately, past performance is not always an indication of future performance and, as is often the case, an asset class which outperforms one year will often end up underperforming the following year. This is particularly the case with more volatile asset classes like shares.

In Meg’s case, let’s consider the impact of a second year in which say her Australian shares fell by 10%, her international equities rebounded 15% and her bonds grew 2%.

In this scenario, Meg’s portfolio at the end of the second year would be worth $52,736 if she had rebalanced after year 1. The same portfolio would be worth just $52,110 with no rebalancing. That’s a difference of 1.2% in just one year.

Of course, if the Australian sharemarket had rallied instead of fallen in year 2, Meg’s rebalanced portfolio might have underperformed a “non-rebalanced” alternative. Rebalancing, like any hedging strategy, won’t always deliver the highest returns in every scenario and can sometimes limit one’s upside potential. At the same time though, rebalancing ensures that you adhere to your risk-return tolerance level, rather than inadvertently take on greater risk (which may, or may not, payoff). Over the longer term, this has been shown to generate higher overall returns and lower volatility.

Rebalancing is an important portfolio management tool which has been shown to deliver significant benefits over the longer term. It does however require discipline and diligence to implement. Six Park automatically takes care of rebalancing portfolios for our clients, making it easier for them to keep their investment strategy on track.