The Six Park portfolios added between +1.3% to +4.6% for the month. On the back of the strong equity market resurgence in January, our rolling 12-month returns are now +4.8% to +8.1%.  The  stark difference in returns since just two months ago (12-month returns as at 31 December 2018 were ‑1.4% to 1.6%) is a useful reminder of how quickly and unpredictably markets can recover and the benefits of staying the course with your investment strategy (read more here). 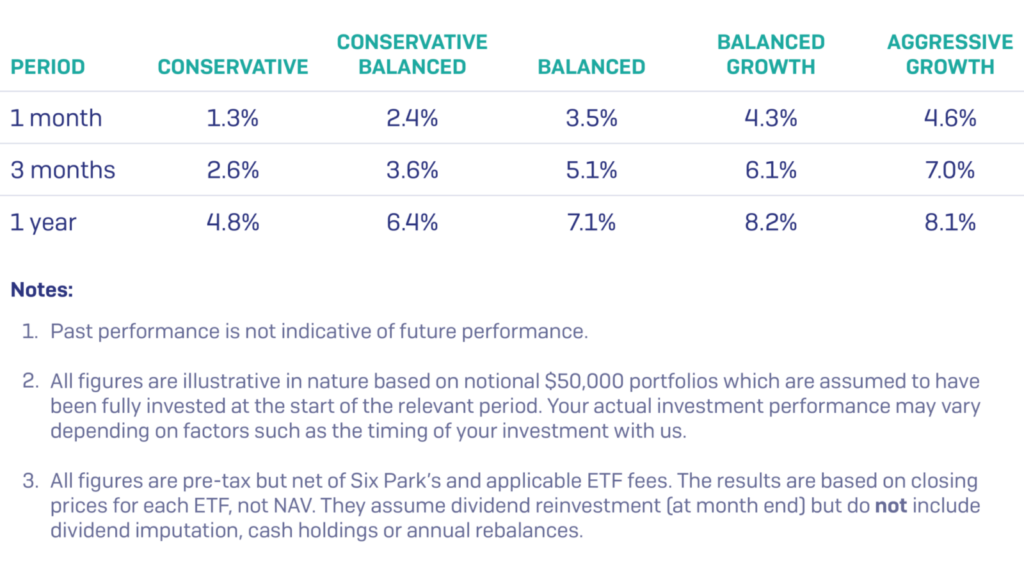 All asset classes posted positive returns in February, leading to consecutive months of “across the board” gains.  The strongest performers were Australian and international shares, which both advanced by more than 5% for the month.

Australian shares closed out February at a five-month high. Local banks were especially strong, benefiting from the release of a royal commission report that did not recommend as extensive an overhaul of the sector as many investors had originally feared. Mining stocks also registered strong gains on the back of an improving outlook for commodity prices and higher -than-expected dividend payouts from the likes of Rio Tinto and BHP.

International shares advanced strongly, with news that the US was suspending further tariffs on Chinese goods in signs of possible resolution to its ongoing trade standoff with China.  US markets were also bolstered by a stronger-than-expected earnings seasons, with roughly 70% of the companies in the S&P500 announcing earnings above consensus estimates.  European and Japanese markets also gained over the month as fears eased somewhat over the extent of the global economic slowdown.

Infrastructure added to its strong January performance (+5.8%), rising a further +4.1% in February.  Advances were led by US infrastructure stocks which continued to rally on news of the Federal Reserve’s more dovish stance towards future interest rate rises (which would help minimise borrowing cost increases).

Emerging markets gained +3% in February, largely on the back of the Chinese market, which rallied on both positive trade development and encouraging credit growth figures. These advances were partly offset by weakness across South American markets, which lost ground on poor economic and retail trade data figures.

Global property added +1.8% for the month, boosted by solid earnings releases and the 1.7% fall in AUD.  On a rolling 12-month basis, global property has now returned +20.8%, a major reversal from the sector’s -5% return in the prior corresponding period.

Fixed income and cash yield returns were positive but subdued, reflecting the prevailing low interest rate environment and the RBA’s decision to keep rates on hold for a 30th straight month.