November was another rollercoaster month for equity markets, with overseas and local stocks climbing early in the month before retreating sharply in the final two weeks.  Emerging markets and infrastructure markets were the standout performers, gaining +3.2% and +1.8% respectively. Overall, the Six Park portfolios were down between -0.1% to -0.8% in November.

The current market selloff has seen the ASX200 drop -9.4% in 3 months, erasing all prior year-to-date gains. As of the end of November, the index is now down -1.1% on a rolling 12-month basis. This is a stark contrast to the +15.3% rolling annual gain it had posted in August this year and a reminder of the inherent (but unavoidable) volatility that comes with investing in higher growth asset classes. Against this unusually weak market backdrop, the Six Park portfolios are up between 0.5% to 1.5% on a rolling annual basis.

Although the current market turbulence is unsettling, we continue to believe that now is not a time for panic or emotionally driven economic decisions. We know from history (read more here) that such approaches are seldom optimal and that investors who manage to hold their nerve during difficult periods like these are usually rewarded over the longer term.

Emerging markets and infrastructure rebounded from two consecutive poor months of losses to register gains of +3.2% and +1.8%. Australian shares, global equities and listed property were the weakest segments, declining -1.3% to -2.3%. 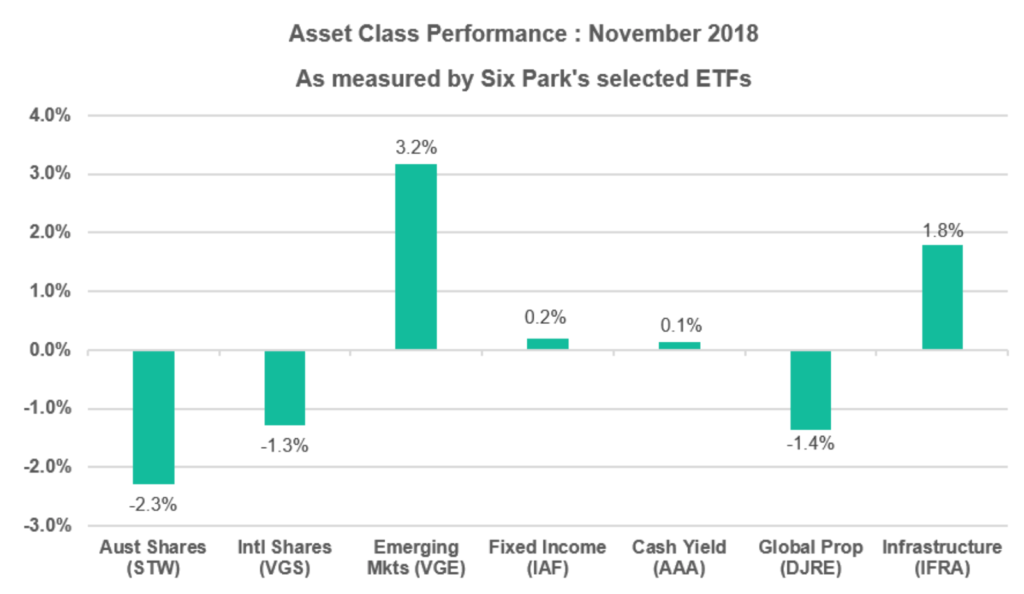 Emerging markets rallied strongly over the month, buoyed by falls in oil prices (a positive for several constituent countries who are net importers of oil) and expectations of more moderate increases in US interest rates.  Chinese equities also gained towards month end on hopes of a positive outcome from trade talks with the US at the G20 summit in Argentina.

Infrastructure stocks rose +1.8%. US transport and utility companies were among the primary gainers, rallying strongly after the US mid-term elections.  Infrastructure spending is one area of common agreement amongst Republicans and Democrats so is expected to take on more prominent role within the political program of a divided US congress.

Returns on fixed income and cash yield assets were both positive but subdued, a function of the continuing low interest rate environment

International shares fell -1.3% in November, although this headline figure belied a range of differing underlying performances. US equity markets ended the month +2% higher, boosted by solid economic data (October job figures exceeded expectations) and indications from the Federal Reserve that it was unlikely to increase the pace of its interest rate increases.  Japanese markets were also up slightly on positive domestic economic news.  These gains were offset by declines across European and UK markets, which were weighed down by concerns over slowing Eurozone economic growth, Brexit uncertainty and Italy’s 2019 budget (the draft plans of which were rejected by the EU). A strong rise in the AUD (which added almost 3 cents) further detracted from performances (as it decreased the value of overseas assets in local currency terms).

Global property declined -1.4% for the month. Although most underlying real estate sectors advanced, these returns were more than outweighed by the sharp rebound in the AUD.

Australian shares slumped a further -2.3% in November, taking the total losses from the quarter to -9.4%.  Losses were broad-based, with all but four of the 22 sub-industry sectors posting declines. Transport and household product stocks were the key gainers (rising 2.9% and 2.2% respectively) while energy and consumer durable sectors fared worse, both declining by more than -10%.