The 2017 financial year drew to a close in somewhat of an anti-climax. Almost all asset classes declined and just two segments (Australian shares and cash yield) managed to eke out small gains.  Overall, the Six Park portfolios were down -0.5% to -1.5% for the month.

Despite this weakness, the Six Park portfolios still returned +2.6% to +11.5% for the year overall.  Gains were highest across our growth-orientated portfolios (Balanced, Balanced Growth and Aggressive Growth).  These portfolios benefited most from exposures to local, emerging market and international sharemarkets, which had all advanced very strongly during the year. Returns across our more defensive portfolios were lower, reflecting the prevailing interest rate environment, but still outperformed bank deposit returns (which averaged approximately 2% for the year according to RBA statistics).

Notes:
(1) Past performance is not indicative of future performance.
(2) Returns above are net of all Six Park fees (est. 0.50%, which includes all brokerage costs).
(3) No rebalancing, cash holdings or trading costs are included.
(4) The above calculations are based on the published closing prices for each ETF, not NAV. They assume dividend reinvestment but do not include any value for dividend imputation credits.

International equities, emerging markets and Australian shares were the standout asset classes for the year, posting stellar gains of 14.2% to 15.5%. This was in stark contrast to the 2016 financial year in which these sectors were the three worst performing asset classes.[1]

This performance inconsistency is a useful reminder of the unpredictability of markets and a key reason why all our portfolios are diversified across multiple asset classes and geographies. 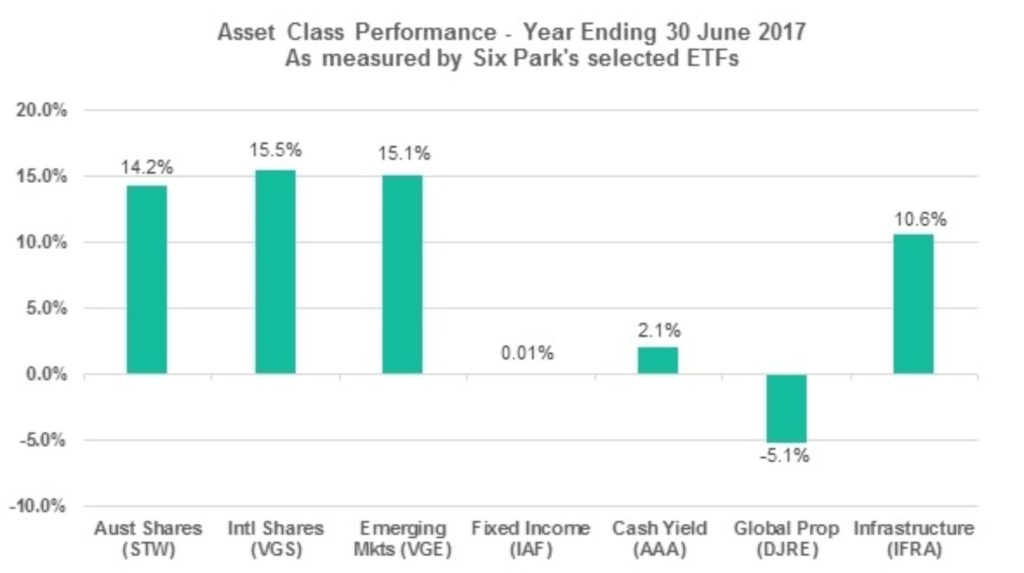 Notes:
(1) The above returns are calculated using the closing prices for each ETF, not NAV, so may differ from those published by the ETF issuers.
(2) The Six Park portfolios did not hold investments in DJRE and IFRA prior to December 2016. Performance figures for full FY2017 period for these asset classes are included for comparative purposes only.