Australia’s interest rates are at record lows and, around the world, unsettling events and divisive politics are dominating headlines and rattling financial markets.

When there’s so much going on in the world, there’s no doubt it can be hard to separate the real issues from the “noise”.

Six Park’s three Investment Advisory Committee members, who each bring a unique lens to the committee’s deliberations, have decades of experience in interpreting the data and sentiment that affect financial markets around the world. All three agree that long-term investors should avoid emotional overreaction that can be caused by market volatility.

Today they share their personal observations on the current economic and political climate.

Six Park co-founder and Investment Advisory Committee chairman Brian Watson AO is a former JP Morgan Australia chairman and a founding member of the Future Fund’s Board of Guardians.

Mr Watson, who has recently returned from several months in the US, says he found the country more divided and unhappy than any time since he began visiting in 1985.

“This is attributable in part to the current President, and his approach to politics, but in reality he is just a symptom of a broader malaise in the country, that has grown out of the increasing inequalities in income, opportunity and education in the US,” Mr Watson says.

“In contrast, the US economy continues to perform well, with profits growing (though slower than in the last few years), and jobs being created to keep employment at historically high levels. 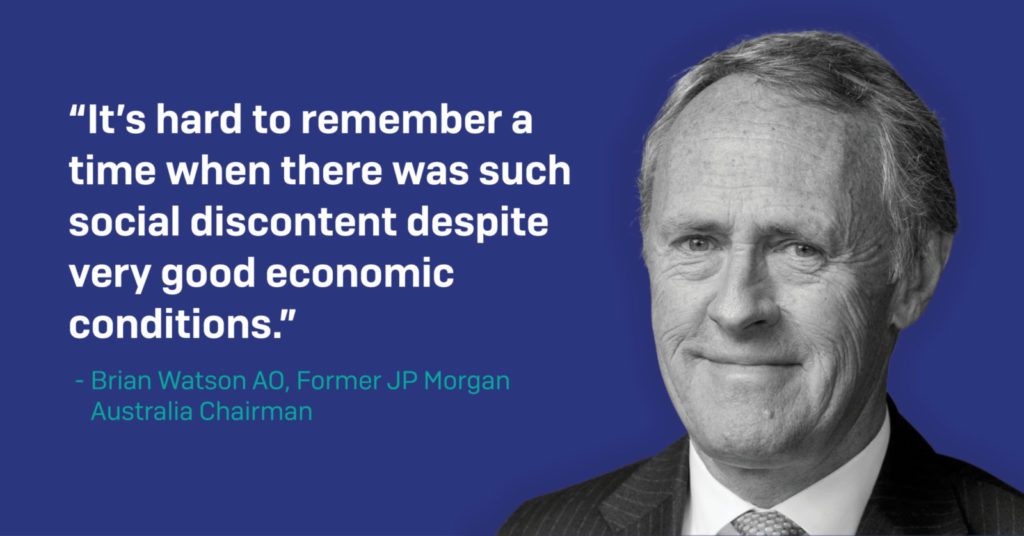 “It’s hard to remember a time when there was such social discontent despite very good economic conditions. However, there is no doubt that the President’s business-friendly policies at a time of very low interest rates have helped the stock market achieve its current level, at or near all-time highs.

“Additionally, most of the business commentators that I respect currently view the chances of a recession in the US before 2021 as low, so that would seem to favour continued exposure to US equities.”

So, what does the current political and social upheaval mean for investors?

“If the Democrats in the US can produce a candidate for the 2020 elections who will beat, or even threaten to beat Mr. Trump, there will be a negative reaction in the stock market. So, if you are a trader, there could be difficult times ahead,” Mr Watson says.

“However, at Six Park, we see ourselves as long-term investors, managing your money accordingly, which means not predicting or reacting to cyclical events like presidential elections. Our view is that market disruptions caused by political events will be sizeable, and we will see greater volatility overall in the near to medium term, but this will pass and it is more important to focus on the long-term drivers of economic growth, which ultimately drive stock markets.”

Former Australian Finance Minister Lindsay Tanner says there has always been a substantial degree of theatre in politics.

“But, with globalisation eroding the real power and control of national governments, the proportion of political activity that is essentially theatre has hit new levels,” Mr Tanner says. 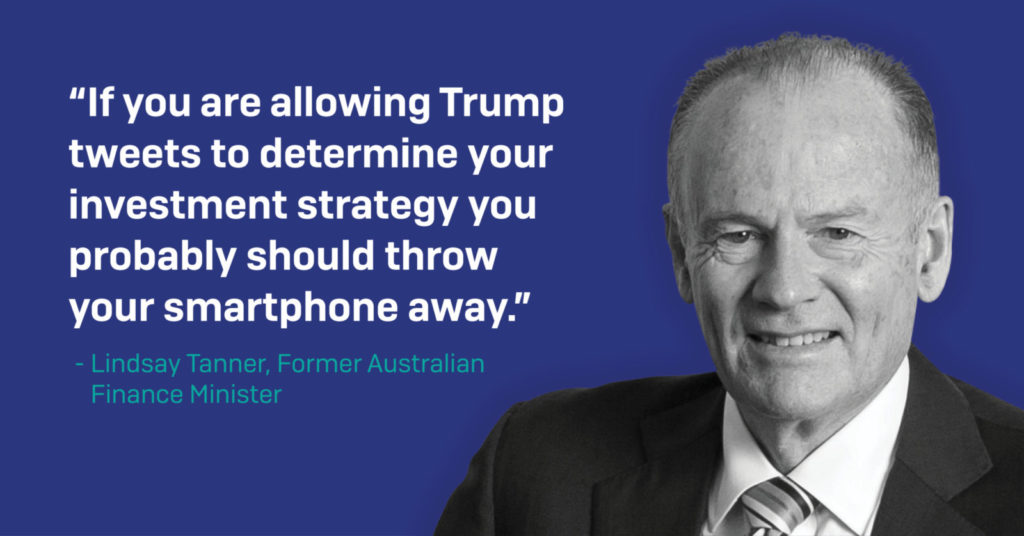 “Underneath the daily pyrotechnics of the Trump Administration lies a very mundane reality – it actually hasn’t done very much. While exercises like the erstwhile trade war with China and summits with North Korea create an impression of activity and achievement, the truth is that not a great deal has happened.

“The major damage from the trade war has been driven by market fears of what is to come, not concrete outcomes from actual decisions.”

Mr Tanner believes President Trump will continue his “unpredictable oscillations” with China for at least another year.

“The aim will be to give himself a pre-election narrative of a grand triumphant bargain or (more likely) of continuing to prosecute a titanic struggle on behalf of the blue-collar workers of America.”

He says the situation with Brexit is different but is still driven to a substantial extent by theatrics as the major players aim to signal to target voters they are “on their side”.

“It’s impossible to predict how events will unfold, but we need to bear in mind that the leading figures like Johnson and Corbyn are intently focused on a likely election, much more so than on the detail of the Brexit outcome, which matters to them primarily as a significant factor in the electoral contest.”

Mr Tanner says that, beneath the pyrotechnics, structural economic and technological changes have unleashed a dramatic reshaping of political fault lines.

“Politics is now so incoherent and shambolic precisely because the traditional major parties no longer reflect well-defined constituencies and distinct socio-economic fault lines,” he explains.

“Parties like Labour and the Tories reflect constituencies that were products of an era when politics and economics were overwhelmingly intra-national.

“As the new Leave-Remain standoff indicates, a new post-globalisation fault line (based predominantly around education level and the distinction between routine and specialised professional and technical labour) has completely superseded the traditional divisions within western societies. This new divide is tearing the established parties apart slowly but surely.”

Mr Tanner says institutionalised social frameworks that take decades and even centuries to develop don’t disappear overnight when the social and economic realities that created them fade away.

“In the meantime, we all have to live through a period of turmoil and exaggerated uncertainty.”

Mark Nicholson, who joined Six Park’s Investment Advisory Committee in February, has worked for some of the world’s biggest and most respected financial institutions, including the World Bank (as a co-chief investment officer in its Investment Department) and Tudor Investment Corporation (a US global macro and multi-strategy hedge fund).

“It seems every week there is another major geopolitical development or incident breaking in the news, often accompanied by over-hyped media reporting,” he says.

“In all the noise created by these events, it is important to consider whether the likely economic impacts are cyclical or structural.” 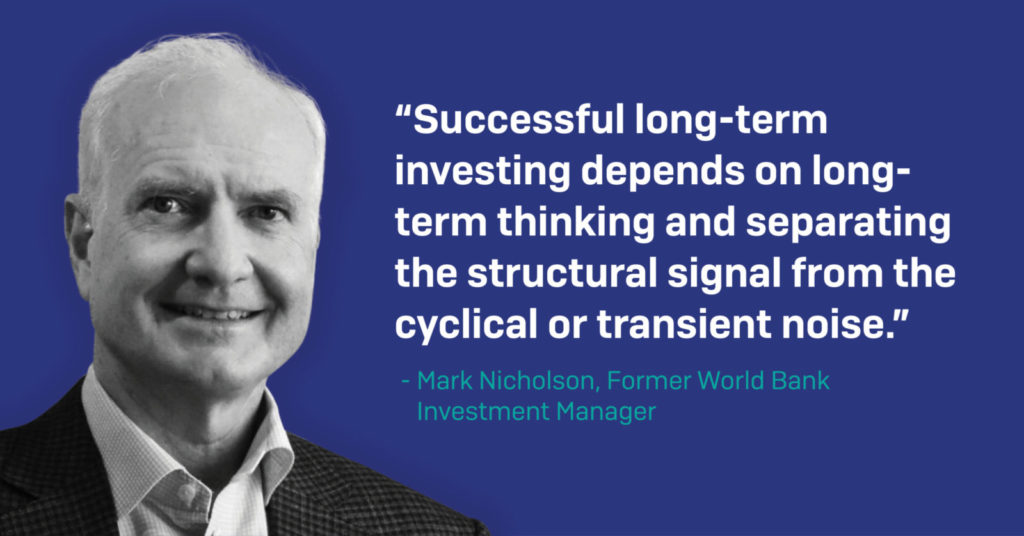 He explains that events that have cyclical effects (multi-year but not long-term) create ups and downs in investment returns but don’t impact the long-term average.

“For instance, sustained Middle East conflict would likely raise the oil price level for multiple years and lead to recession in oil importing countries. But in time, fiscal and/or monetary policy easing counters the higher oil price and growth returns to its previous trend.”

“Different kinds of debt – including government debt (EU and the US), corporate debt (China) or household debt (Australia) – are at historically very high levels. Debt levels relative to GDP cannot rise infinitely, so as debt growth slows, so too does the economy.

“Left wing populism (in the American sense) may well threaten profit margins in coming years. A sustained populist backlash against the uneven distribution of the benefits of economic growth would have more serious implications for investment returns than Trump’s impeachment proceedings.

“Finally, technological change has for centuries been a structural force impacting economic growth and investment returns.”

Mr Nicholson uses interest rates as one example of the impact of long-term structural forces on investment returns.

“The four structural forces mentioned are all likely to cause interest rates to remain significantly lower than levels averaged in the 25 years before the GFC. High debt levels mean that the impact of monetary tightening by central banks is much greater today. Additionally, most countries are fiscal policy constrained, due to excessive government debt, so monetary policy has to do the heavy lifting if growth slows.

He says a portfolio’s allocation to fixed income today requires a balancing of the structural forces for low interest rates against the asset class’s lower returns and higher risk.

“The traditional role of bonds in a portfolio is to earn a modest but secure return, provide diversification for a more stable portfolio return, and finance equity rebalancing when equities fall. Today, fixed income offers a low return pick-up over cash and will suffer losses if inflation does indeed return, either through central bank stimulus or the advent globally of more radical government policies pushing for balanced growth but having inflationary side-effects. At Six Park we set fixed income allocations in our portfolios which balance the role of fixed income in a portfolio with these risks, resulting in somewhat lower fixed income allocations than might have been held a decade ago and with no allocations to international bonds.”

WHAT DOES ALL THIS MEAN FOR INVESTORS?

The members of Six Park’s Investment Advisory Committee each recognised the uncertainty many investors are feeling as a result of current economic and political conditions. However, each also shared similar sentiments about long-term thinking and its importance to successful investing.

Mr Watson said it was easy to underestimate the resilience of the US at times like the present.

“A lot of investors have lost a lot of money doing that over the decades. However, it remains the world’s most innovative and vibrant economy, and until it is clear that has changed we will continue to recommend exposure to its stock market across all of our portfolios, through our international equities ETF.”

Mr Nicholson recommended that investors remind themselves of their investment approach.

“Successful long-term investing depends on long-term thinking and separating the structural signal from the cyclical or transient noise.”

Finally, Mr Tanner’s advice for investors was succinct: “The key for investors is to stay calm, hold your nerve and take care not to jump at shadows. If you are allowing Trump tweets to determine your investment strategy you probably should throw your smartphone away.”

Six Park’s Investment Advisory Committee oversees our long-term investment strategy and asset allocation. To get started with Six Park, visit www.sixpark.com.au or book a free phone consultation at a time that suits you.