When my dad passed away in 1997, I had to become an investment manager very quickly. Having been in the banking industry for almost 10 years with JP Morgan in New York, I took on the role of working out what to do with the assets Dad left for Mom.

She received social security payments and inherited Dad’s pension, but this income was not enough to fund what I determined to be her annual cash need. Dad had owned a small portfolio of blue-chip stocks that included good companies, but it was too concentrated and thus poorly diversified. Mom, now in her 80s, was in her early 60s back then, with a lot of runway to go.

I really needed to diversify Mom’s assets and sources of income to reduce overall risk and still provide enough annual income.  In short, I sold portions of the blue-chip stocks and bought a variety of ETFs to create a well-diversified, income-generating investment portfolio (including bonds and other defensive assets).

Mission accomplished.  And then it wasn’t (or at least didn’t feel like it).

Stock markets did what they periodically do – they went down, fast.  There was an Asia-induced drop in late-1997, but most memorable were the dotcom bust in 2001-02 and the GFC in 2007-08. Mom’s financial wellbeing included a fair allocation to shares (as the growth assets in the portfolio), so it was not immune from steep falls in global equity markets.  Down 10%, 20%, 30%…

How did I feel during these times? Anxious. Stressed. Sleep? Nope. I could go on. It’s natural. I have been in the financial markets all my life, but I’m not immune to the feelings brought on by looking at the value of a portfolio drop precipitously. The crazy thing about market “crashes” is that for a period of time, the value of pretty much all asset classes (except cash) drop. All the conventional wisdom and rules of the road with investing tend to go flying out the window, typically for a relatively short time. And people tend to respond accordingly – with panic, which exacerbates the problem.

So, what to do? I was fortunate to have a sounding board in my Six Park co-founder, Brian Watson AO, who offered some guidance: for most people, the best thing to do in times like we are experiencing now is to sit tight, stay calm and let markets rebound over time. I knew this in theory, but when emotions hit, it helps to have someone who had been through such cycles provide a steady hand of guidance.

Markets did always recover (and then some), life went on; there were sell-offs again that were still unsettling but became less scary. It became easier for me to have confidence that, as dark as the night seemed, there was always a dawn ahead and things would return to normal. For me (and Mom), it was in fact smart to remain invested and benefit from eventual market rebounds (you really don’t want to miss the big jumps when they occur, which is impossible to predict).

For some, the volatility is too hard to stomach.  Or the need for cash is near-term, so staying in the market may not be the right course. Some people adjust their asset allocations to a more defensive stance.  But, like most readers, I’ve seen all the “famous stock market sayings” from the likes of Warren Buffett. These “stay the course” principles are not just simple quips, they are founded on real data and actual market history.

I was the beneficiary of some very prudent and calming guidance back then. 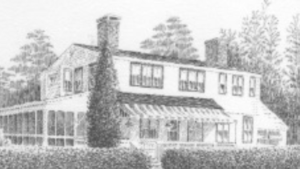 FROM 6 PARK AVENUE TO SIX PARK

Some additional background for context: Six Park is the address of our family beach house on the east coast of the US in the small state of Delaware. It is a rather plain but large house by the water that has enabled us to gather since my grandparents bought the house 60 years ago.  The rat pack of grandchildren (my cohort), spent the three summer months of every year running amok, enjoying everything that life had to offer at the shore, because we knew that there were trusted adults watching out for us, and the big old house was sturdy and could weather the storms that come with beach life.

Six Park (the business) tries to be that steady hand that helps investors weather the rough weather that is an inevitable part of investing. At times like these, some people need to sell down their investments and sit tight.  But for most, we try to do what Brian did for me many years ago: Preach patience during times of instability and be a trustworthy platform that (like the old beach house) has adults who are in fact looking after things, watching for storms and battening down the hatches when they do arrive.  One of our founding investment committee members, Paul Costello, who regretfully passed away in 2018, called it “pothole spotting”.  There may not be a more valuable service that an investment manager can provide.

Sometimes “Stay calm and sit tight” simply doesn’t feel like the right answer because when the wind is blowing hard, there is a natural instinct to want to do something. But if you trust the house will hold up and that the storm will pass, you might just be able to let someone else worry for you while you learn how to play inside for a little while.